PC Perspective came across leaked SiSoft Sandra benchmark results of AMD's Carrizo APU. This new chip is intended primarily for notebooks and it seems it will provide a big boost in integrated graphics performance. If the SiSoft data is accurate, Carrizo is about twice as fast as Kaveri and three times faster than Intel's Iris Pro.

The Carrizo APU scores 606.64Mpix/s in the SiSoft Sandra GP (GPU/CPU/APU) Processing test, a level that can be compared with the Radeon R7 265, a card that offers roughly the same graphics performance as the chip inside the PlayStation 4.

The new mobile APU will be manufactured with the same 28nm process as Kaveri, with power consumption up to 35W for the Carrizo down to a maximum of 15W for the ultra-mobile Carrizo-L parts. 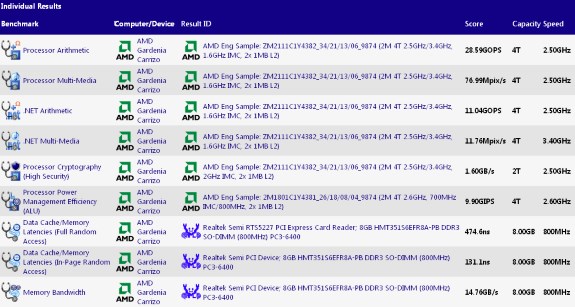