Microsoft is hosting its Windows 10 consumer features event right now and one of the big things the firm announced is that Windows 10 will be a free upgrade for Windows 7, Windows 8.1 and Windows Phone 8.1 users!

The software giant's goal is to get as many people as possible to upgrade to the new platform, which will prevent another Windows XP-like disaster when Windows 7 extended support ends in 2020.

The only major requirement seems to be that you have to upgrade in the first year after Windows 10 launches to get it as a free upgrade.

Terry Myerson just announced on stage that, for the first year after Windows 10 launches, any device running Windows 7, Windows 8.1, or Windows Phone 8.1 will be able to upgrade to the latest version of MIcrosoft's OS — for free. How exactly this program will work isn't clear just yet — it'll certainly be subject to some hardware requirements, particularly for older machines running Windows 7. But a simplified upgrade path will likely do a lot to help Windows 10 adoption — rather than dealing with a number of different versions of Windows and different upgrade costs, most consumers will simply take this free update and enjoy running Microsoft's latest. 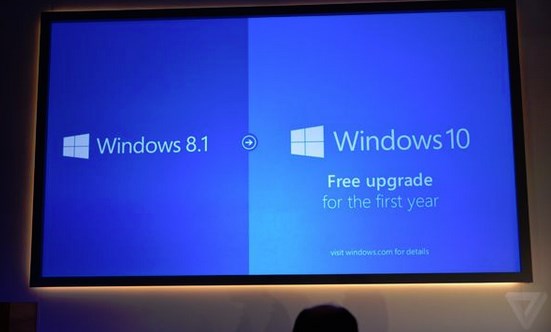