Posted on Tuesday, January 27 2015 @ 13:22 CET by Thomas De Maesschalck
Jon von Tetzchner, co-founder of Opera and former CEO of the company, has kicked off a new browser project that aims to fulfill the needs of power users. Von Tetzchner explains Opera has gone to wrong way and that he hopes to do things right with Vivaldi, a community project based on Google's Chromium engine.

Vivaldi is aimed exclusively at power users, the kind of users who spends a lot of time, keeps a lot of tbas open and likes to work efficiently with a lot of content. You can download the first technical preview of Vivaldi over here, it already has lots of nifty features but is still a work in progress and some functions like a bookmarks bar are still missing. In the long run, von Tetzchner plans to incorporate a mail client into Vivaldi as he believes this was one of the strengths of the early versions of Opera.

Opera’s former CEO Jon von Tetzchner is launching the first preview of Vivaldi today, a new Chromium-based browser that is squarely aimed at power users. Vivaldi features tools like Quick Commands for using written commands instead of the mouse, an Opera-like Speed Dial for quickly accessing bookmarks, a note-taking feature and the ability to organize tabs into stacks.

“We are making a browser for our friends,” von Tetzchner told me earlier this week. “Vivaldi is for all those people who want more from their browsers.” 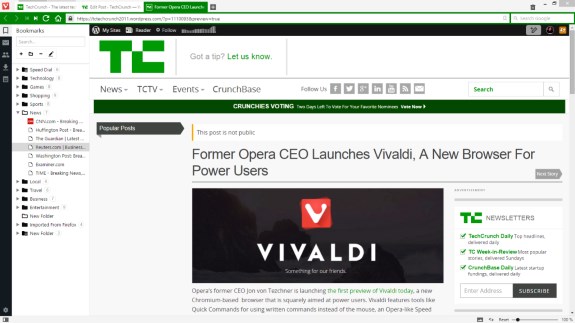