Posted on Wednesday, January 28 2015 @ 17:10 CET by Thomas De Maesschalck
AMD's add-in-board partners are reportedly worried as consumers are increasingly flocking to NVIDIA-based graphics cards. Hexus writes AMD's partners are reducing orders of AMD GPUs due to lower demand and that they are concerned the market could increasingly lean towards NVIDIA, causing them to lose bargaining chips.

An overview of AMD's and NVIDIA's marketshare from the last couple of years can be viewed in the chart below. The most recent data comes from the Q3 2014 market report from Jon Peddie Research, it will be interesting to see of AMD managed to reverse the trend in Q4 2014.

With a disappointing year drawn to a close for AMD its partners are bracing for a shaky first half to 2015 before things improve. Digitimes report that AMD add-in board partners (AIBs) have reduced their orders of AMD GPUs to prevent inventory build-up. The second half of this year will be crucial for AMD since the company announced it will release new products during Q2 and H2 of 2015. A new graphics card line-up is expected to be an integral part of that strategy.

In the longer term AMD's restructuring entails a reduction of research and development spending which affects its graphics division. This has led Digitimes to the conclusion "graphics card vendors are also concerned that the market could gradually lean towards Nvidia, causing them to lose bargaining chips with GPU makers".

Until the updated figures for Q4 of 2014 emerge from the likes of Jon Peddie Research it's difficult to draw any conclusions about the state of play in the graphics card market right now. We are certainly very excited to see what AMD will bring to the market in response to Nvidia's newly-released GTX 900 series. 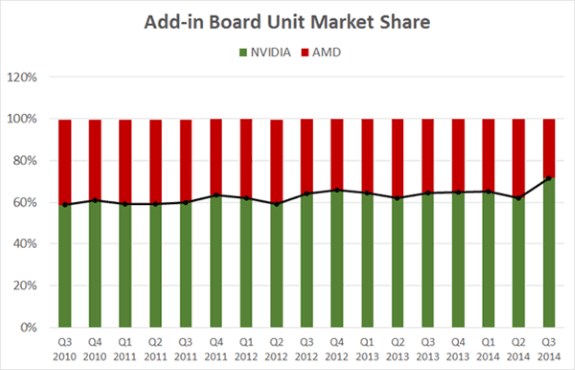