Posted on Monday, Feb 23 2015 @ 22:34 CET by Thomas De Maesschalck
Reports about add-in board (AIB) makers getting worried about AMD's position in the graphics card market didn't appear to be a lie as Jon Peddie's new GPU marketshare report shows NVIDIA once again captured significant marketshare from AMD in the final quarter of 2014.

NVIDIA is keeping up well in the shrinking market as the company is gaining significant marketshare at the expense of AMD. A couple of years ago the marketshare ratio of the two firms was split around 60/40 but last quarter AMD's GPU marketshare fell to a low of 24.0 percent. Despite lower pricing and free gaming bundles AMD's Radeon cards are failing to attract consumer demand, one year ago AMD's graphics cards still commanded a marketshare of 35.0 percent. In the same timeframe, NVIDIA managed to increase its marketshare from 64.9 percent to 76.0 percent.

JPR’s AIB Report tracks computer add-in graphics boards, which carry discrete graphics chips. AIBs used in desktop PCs, workstations, servers, and other devices such as scientific instruments. They are sold directly to customers as aftermarket products, or are factory installed. In all cases, AIBs represent the higher end of the graphics industry using discrete chips and private high-speed memory, as compared to the integrated GPUs in CPUs that share slower system memory.

The news was encouraging and seasonally understandable, quarter-to-quarter, the market decreased -0.68% (compared to the desktop PC market, which decreased 3.53% ).

However, in spite of the overall decline, somewhat due to tablets and embedded graphics, the PC gaming momentum continues to build and is the bright spot in the AIB market.

The overall PC desktop market increased quarter-to-quarter including double-attach—the adding of a second (or third) AIB to a system with integrated processor graphics—and to a lesser extent, dual AIBs in performance desktop machines using either AMD’s Crossfire or Nvidia’s SLI technology. 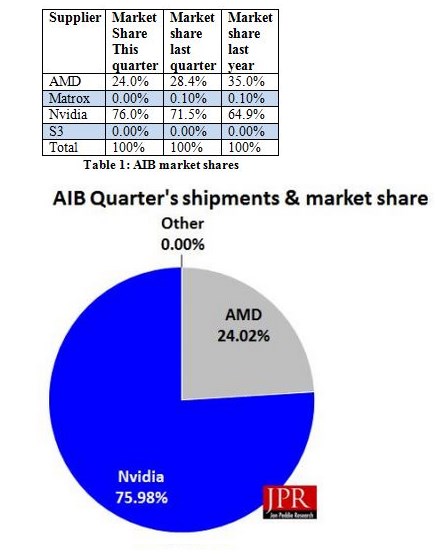