AMD released details about its upcoming Excavator-based Carrizo APU at the 2015 IEEE international Solid-State Circuits Conference (ISSCC). Still made on a 28nm process, the successor to the current "Kaveri" processor generation promises big energy efficiency gains. You can find a full overview at TPU.

The biggest of these is the "Excavator" CPU module. 23 percent smaller in area than "Steamroller," (same 28 nm process), Excavator features a new high-density library design, which reduces die-area of the module. Most components are compacted. The floating-point scheduler is 38% smaller, fused multiply-accumulate (FMAC) units compacted by 35%, and instruction-cache controller compacted by another 35%. The "Carrizo" silicon itself uses GPU-optimized high-density metal stack, which helps with the compaction. Each "Excavator" module features two x86-64 CPU cores, which are structured much in the same way as AMD's previous three CPU core generations.

Desktop enthusiasts are out of luck though as there are no plans for an AM3+ version of Carrizo. 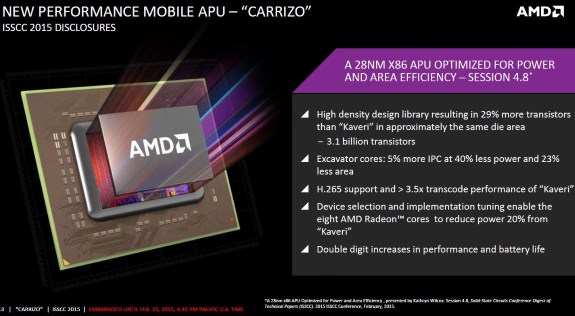