The concept doesn't look like much but it consists of a construction of stacked 0.1mm thick copper sheets perforated with an offset pattern of very tiny pores to encourage capillary action.

Fujitsu expects the first devices with this new heatpipe technology will hit the market in "fiscal 2017".

So how does Fujitsu construct its new thin loop heat pipe offering 5X efficiency? Describing the background to this cooler design Fujitsu says:

"A loop heat pipe is a heat-transfer device that consists of an evaporator that absorbs heat from the heat source and a condenser that dissipates that heat away, with the two components connected by pipes into a loop (Figure 1). A working fluid is encapsulated inside this closed loop as a coolant. The heat from the heat source evaporates the coolant, and the energy that goes into evaporating the coolant is taken away from the heat source, lowering its temperature. It is based off of the same principle used when sprinkling water on pavement to reduce heat." 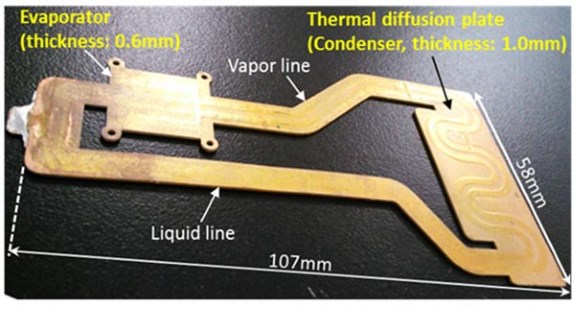