Posted on Friday, March 27 2015 @ 12:35 CET by Thomas De Maesschalck
Yesterday Futuremark announced the availability of the 3DMark API Overhead test, a new benchmark to simulate how many draw calls your PC can handle at 30fps with DX11, DX12 and Mantle. We've been hearing quite a lot in recent months about how much of a performance boost DX12 can deliver and this test deliver very promising results.

AMD did some testing of its own and writes DX12 enables 1547% more draw calls on a Radeon R9 290X and 953% more on a R7 260X. The firm also demonstrates CPU performance scaling with DX12. Real-world gains are going to be far less impressive of course but will still be very amazing.

DirectX 12 also has implications for performance scaling on multi-threaded CPUs. On an eight-core AMD FX-8350 CPU, the number of draw calls that can be issued under DirectX 12 scales with the number of cores on tap (up to six cores), while DirectX 11 doesn't take advantage of more than two cores. AMD says DirectX 12's multi-threaded command buffer recording capability is to thank for this performance scaling on the CPU. 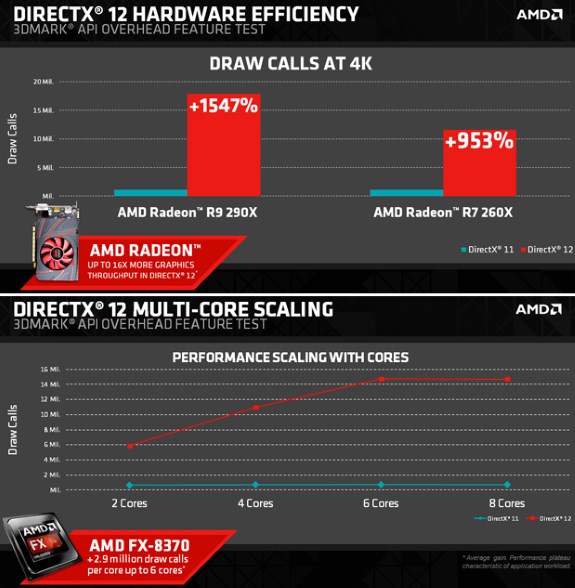 PC World did some further testing and discovered that in the 3DMark API comparison test, AMD's Radeon R9 290X manages to beat NVIDIA's GeForce GTX Titan X! However, keep in mind that Futuremark did not design this test as a tool to compare GPUs or even to compare different PCs. The firm explicitly mentions this test is for measuring API efficiency on individual PCs and should not be used for comparisons.