Posted on Friday, May 15 2015 @ 13:21 CEST by Thomas De Maesschalck
A new study released by the European Commission’s Joint Research Centre suggests raids on large-scale piracy websites are relatively ineffective and potentially counterproductive. Researchers studied the impact of the shutdown of Kino.to, a popular movie streaming portal that was closed in 2011 in an operation that involved raids in Germany, Spain, France and the Netherlands on several residential addresses and data centers as well as arrests of over a dozen individuals connected to the site.

A detailed look at how the raid on kino.to changed the online movie streaming landscape shows the raid was relatively ineffective. The first four weeks following the intervention, piracy consumption was down 30 percent, after which piracy levels returned to normal as pirates found alternatives. At the same time, consumption of movies via legal platforms increased by only 2.5 percent. The paper claims that after factoring in the costs of the raids and prosecution, the shutdown has not had a positive effect on overall welfare.

The researchers also note Kino.to was quickly replaced by several new illegal streaming services that filled the void. While previously the landscape was dominated by a single site, the raid resulted in a "Hydra" effect that splintered the landscape which would make future shutdowns even less effective and more costly.

“Our analysis shows that the shutdown of kino.to resulted in a much more fragmented structure of the market for unlicensed movie streaming,” the paper reads. 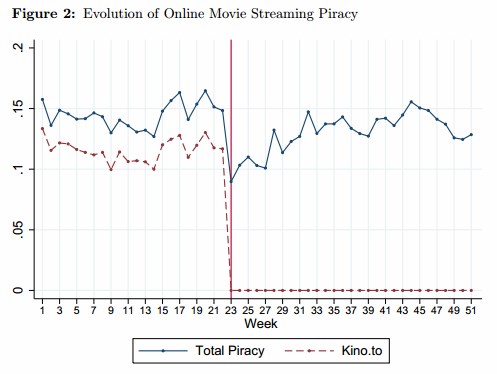