Posted on Monday, Jul 13 2015 @ 14:01 CEST by Thomas De Maesschalck
Researchers from the Chalmers University of Technology in Sweden and partners from other institutes have created a new graphene-based material that can be used to cool chips efficiently. Previous attempts struggle with adhesiveness but now the researchers managed to create a 20 micrometer thick film that boasts four times the thermal conductivity of copper.

'[i]We have now solved this problem by managing to create strong covalent bonds between the graphene film and the surface,' crowed Liu, 'which is an electronic component made of silicon..' This breakthrough, the paper explains, is the result of graphene functionalisation: the addition of a property-altering molecule to make graphene more useful, in this case (3-Aminopropyl) triethoxysilane. When heated and put through the process of hydrolysis, the additive creates strong silane bonds between the graphene and the electronic component to be cooled. As an added advantage, it doubles the thermal conductivity of the graphene - leading to a 20 micrometer-thick film boasting thermal conductivity of 1600W/mK, four times that of copper. 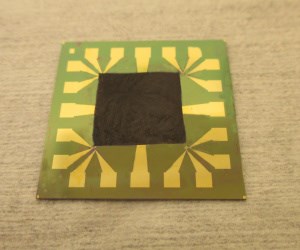