Winner takes it all: Apple takes home 92% of smartphone profits

Research firm Canaccord calculated that Apple's profit margin on its iPhone lineup is truly extraordinary. In the first quarter of this year, Apple accounted for 92 percent of the total operating income from the world's eight top smartphone makers, up from 65 percent a year earlier. Quite a feat considering Apple sells less than 20 percent of world's smartphones.

Samsung ranks second with 15 percent of the profit. The accounting is a bit weird but the report notes Apple and Samsung account for over 100 percent of industry profits because other smartphone makers either broke even or lost money.

Apple’s share of profits is remarkable given that it sells less than 20% of smartphones, in terms of unit sales. The disparity reflects its ability to command much higher prices for its phones. Its rivals mostly use Google Inc.’s Android operating system, making it harder for them to distinguish their offerings, and prompting many to compete by cutting prices. Moreover, Samsung and HTC have made missteps in recent years. 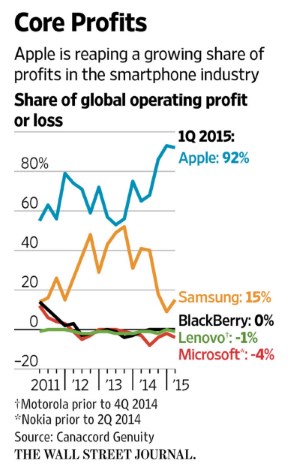