Posted on Wednesday, Jul 22 2015 @ 13:17 CEST by Thomas De Maesschalck
Images of the GIGABYTE Z170-SOC Force motherboard have hit the web. This upcoming standard ATX-sized motherboard is designed for Intel's Skylake, it uses the Z170 chipset and has a LGA1151 socket.

USB connectivity includes two USB 3.1 ports (two type-A, from which one converts to type-C if it's populated), eight USB 3.0 ports (four on the rear panel, four by header), and a number of USB 2.0/1.1 ports, including two type-A ports near the SATA ports (could help serve as "front-panel" ports in bench-type case setups). Display outputs include one each of DVI, HDMI and mini-DisplayPort (which likely also means availability of Thunderbolt 20 Gb/s). Gigabit Ethernet and GIGABYTE's latest generation Amp-Up audio solution make for the rest of it. A plethora of onboard OC control options are available. 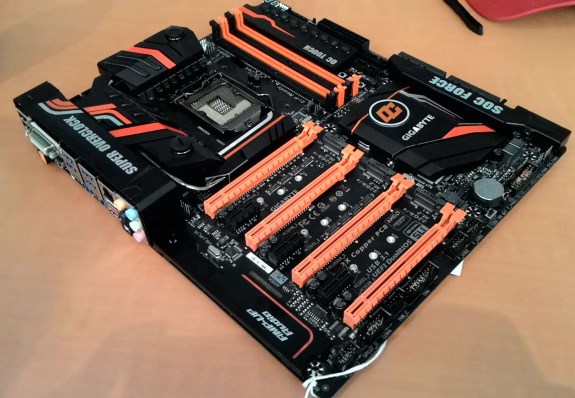