Posted on Tuesday, Aug 04 2015 @ 23:28 CEST by Thomas De Maesschalck
SanDisk and Toshiba announced the joint development of a new 3-bit-per-cell (TLC) 48-layer 3D NAND flash memory chip that offers a storage capacity of 256Gb (32GB) - that's double as much as what the firms were previously shipping.

“We are pleased to announce our first 3D NAND chip targeted for production,” said Dr. Siva Sivaram, executive vice president, memory technology, SanDisk. “This is the world’s first 256 Gb X3 chip, developed using our industry-leading 48-layer BiCS technology1 and demonstrating SanDisk’s continued leadership in X3 technology. We will use this chip to deliver compelling storage solutions for our customers.”

SanDisk’s 256 Gb X3 BiCS chip is designed for wide applicability in consumer, client, mobile and enterprise products, and is expected to begin shipping in SanDisk’s products in 2016. 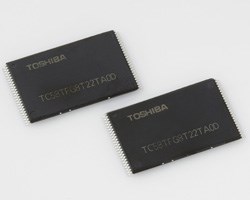