Posted on Wednesday, Aug 12 2015 @ 16:36 CEST by Thomas De Maesschalck
Tom's Hardware set up shop at Newegg's Hybrid Center in City of Industry, California to let readers do a side-by-side blind test of AMD's FreeSync and NVIDIA's G-Sync technology. There were a total of 48 participants and the results are quite interesting as the vast majority claimed the machines with NVIDIA's G-Sync technology delivered the best gaming experience.

Twenty-nine (or 60 percent) of the participants in the blind test chose NVIDIA's G-Sync, ten preferred AMD's FreeSync and the remaining nine said they were of equal quallity. You can read the full details of the test and its methodology over here.

Then again, you’ll also pay $150 more for the G-Sync monitor we tested today—a premium that exceeds what most of our respondents claimed they’d be willing to spend for the experience they ultimately preferred, and some of those folks even picked AMD’s less expensive hardware combination as their favorite.

Given the technical similarities of what FreeSync and G-Sync set out to achieve, so long as they’re both in their variable refresh range, all of our sources suggest you should get fundamentally identical results from them. On paper, that is. Differences do crop up outside of those upper and lower bounds, where FreeSync and G-Sync ask you to pick between v-sync on or off, and G-Sync is able to double (or more) screen refreshes when they drop below 30 FPS. We chose to leave v-sync off on the FreeSync-capable machines after surveying our readers’ habits and acknowledging AMD’s default driver behavior. However, it would have been interesting to compare results with v-sync on, particularly in Borderlands. 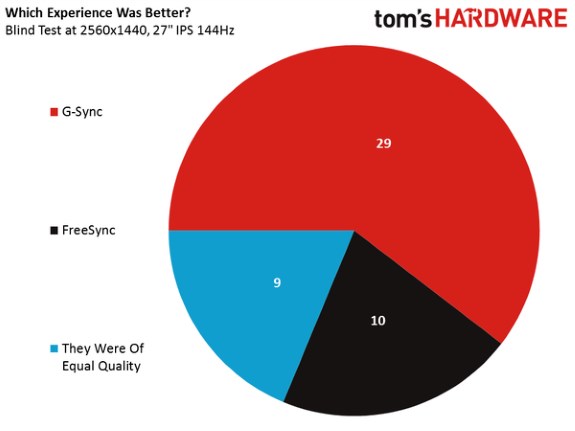