A bunch of new information about Intel's Skylake processor architecture was outlined at the IDF in San Francisco. The new chip features higher IPC performance and better power efficiency, and comes DDR4 support, a new graphics architecture with DX12 support and new eDRAM configs, and integrated camera ISP. One of the unique aspects of Skylake is how widely it can be used, it scales from 4.5W for tablets and ultralight systems to up to 95W for desktop PCs. A brief discussion of the new features and a collection of the slides from Intel can be viewed at HotHardware.

To put all of this more simply, Skylake can have more instructions in flight at any given time, IPC performance has been increases through cache and front end optimizations, and power efficiency has been improved as well. In fact, Skylake will scale all the way down to 4.5 watts and up to 91 watts. 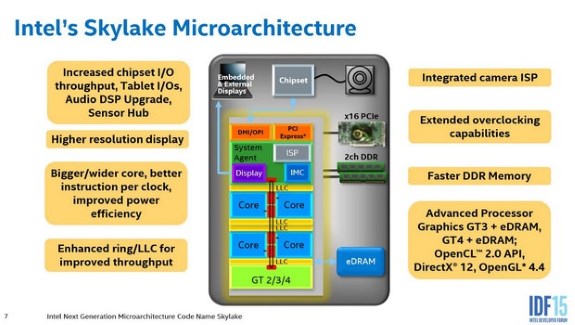 A more in detailed discussion of the aspects that make Skylake faster and more efficient can be read at ARS Technica. On the power consumption side, one of the most significant new features is Speed Shift Technology. This feature puts much more control over power management in the hands of the processor, making it far more responsive than before:

More details about Skylake will be released later today.