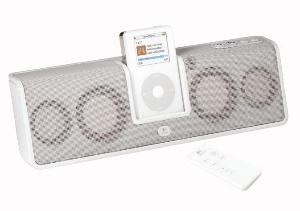 The new performance mobile music speaker system, the Logitech mm50 portable speakers for iPod, offers customized iPod features, superb sound quality, and a built-in rechargeable lithium-ion battery. The speakers simultaneously recharge the iPod battery as well as the speaker battery when powered by the included AC adapter. The speaker battery lasts up to 10 hours per charge. And, the mm50 includes a wireless remote control, allowing people to adjust the volume, track forward, track back, play and pause the music without touching the speaker system or the iPod.

The Logitech mm50 portable speakers for iPod are included in Apple's "Made for iPod" program. "Made for iPod" means that an electronic accessory has been designed specifically to connect to the iPod and has been certified by the developer to meet Apple performance standards.