ROG Maximus VIII Extreme/Assembly sports the new Titanium Armor & Plasma Copper ROG color scheme and is based on the Intel Z170 Express chipset. It features several exclusive technologies to maximize the performance and overclocking potential of the Intel 6th-generation processors and DDR4 memory. Maximus VIII Extreme/Assembly comes bundled with the ROG 10Gb/s Ethernet add-on card which is the fastest currently available. Tremendous effort has been put into developing the new ROG SupremeFX Hi-Fi audio solution. This features an ESS ES9018K2M digital-to-audio converter (DAC) for lower audio jitter, two Texas Instruments LM4562 operational amplifiers for superior audio signal amplification, plus a TPA6120A2 headphone amplifier to drive high-fidelity headphones. This kind of audio solution on a Maximus motherboard may seem like overkill but in actual fact, every aspect of the board has been designed that way, hence the name ‘Extreme’.

The new ROG Matrix GTX 980 Ti Platinum gaming graphics card is packed with DirectCU II with the patented Wing-Blade Fan Design for maximum air flow with 25% cooler and 3 times quieter performance. This card is manufactured using an exclusive new process using ASUS AUTO-EXTREME Technology, Super Alloy Power II components are featured for premium quality and best reliability even when overclocked. Memory Defroster is back to cater for extreme overclockers – it defrosts the Matrix card’s memory during subzero overclocking to ensure sustained stability. You don’t have to be an expert to push the card to extreme levels, you can use GPU Tweak II, as well as the one-click Safe Mode that restores VBIOS to its original settings. On the top of the Matrix is a color-coded ROG load indicator which you can use to check the GPU load levels or show off your system. 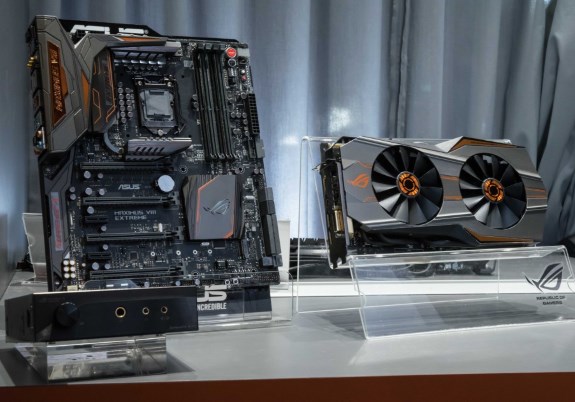