Pluto has a blue sky and water ice

Posted on Thursday, Oct 08 2015 @ 18:26 CEST by Thomas De Maesschalck
The big NASA announcement from today is the discovery that Pluto has not only blue skies but also water ice. The space agency's New Horizons craft found that Pluto has a high-altitude haze that scatters blue light similar to our sky. A very cool find indeed.

The haze particles themselves are likely gray or red, but the way they scatter blue light has gotten the attention of the New Horizons science team. “That striking blue tint tells us about the size and composition of the haze particles,” said science team researcher Carly Howett, also of SwRI. “A blue sky often results from scattering of sunlight by very small particles. On Earth, those particles are very tiny nitrogen molecules. On Pluto they appear to be larger — but still relatively small — soot-like particles we call tholins.”

Scientists believe the tholin particles form high in the atmosphere, where ultraviolet sunlight breaks apart and ionizes nitrogen and methane molecules and allows them to react with one another to form more and more complex negatively and positively charged ions. When they recombine, they form very complex macromolecules, a process first found to occur in the upper atmosphere of Saturn’s moon Titan. The more complex molecules continue to combine and grow until they become small particles; volatile gases condense and coat their surfaces with ice frost before they have time to fall through the atmosphere to the surface, where they add to Pluto’s red coloring. 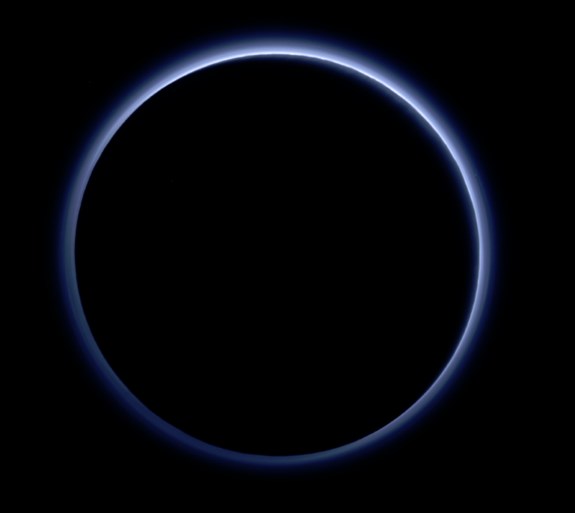 Water Ice on Pluto: Regions with exposed water ice are highlighted in blue in this composite image from New Horizons' Ralph instrument, combining visible imagery from the Multispectral Visible Imaging Camera (MVIC) with infrared spectroscopy from the Linear Etalon Imaging Spectral Array (LEISA). The strongest signatures of water ice occur along Virgil Fossa, just west of Elliot crater on the left side of the inset image, and also in Viking Terra near the top of the frame. A major outcrop also occurs in Baré Montes towards the right of the image, along with numerous much smaller outcrops, mostly associated with impact craters and valleys between mountains.