AMD recaptured a bit of GPU marketshare in Q3 2015

Posted on Monday, Nov 16 2015 @ 12:48 CET by Thomas De Maesschalck
Jon Peddie Research writes the discrete graphics card market is picking up again, sales rose 27.6 percent quarter-over-quarter, but are still down 3.8 percent versus the same period in 2014. The report found that AMD managed to increase its shipments by 33.3 percent this quarter, raising the company's marketshare from 18.0 percent to 18.8 percent, sequentially. NVIDIA on the other hand saw its sales soar by just 26.4 percent, which resulted in its marketshare dropping from 81.9 percent to 81.1 percent.

At Nvidia’s GPU Technology Conference in Japan, the company revealed its next-generation GPU code-named “Pascal.” AIBs based on Pascal will have up to 16GB of HBM2 with up to 1 TB/s bandwidth.

JPR’s AIB Report tracks PC add-in graphics boards (AIBs), which carry discrete graphics chips. AIBs are used in desktop PCs, workstations, servers, and other devices such as scientific instruments. They are sold directly to customers as aftermarket products, or are factory installed. In all cases, AIBs represent the higher end of the graphics industry using discrete chips and private high-speed memory, compared to the integrated GPUs in CPUs that share slower system memory.

The news was encouraging and seasonally understandable, quarter-to-quarter; the AIB market increased 27.6% (compared to the desktop PC market, which increased 7.6%).

On a year-to-year basis, we found that total AIB shipments for the quarter fell -3.9%, which is less than desktop PCs, which fell -8.9%.

However, in spite of the overall decline, due somewhat to tablets and embedded graphics, the PC gaming momentum continues to build and is the bright spot in the AIB market.

The overall PC desktop market increased quarter-to-quarter including double-attach (the adding of a second (or third) AIB to a system with integrated processor graphics. To a lesser extent, dual AIBs in performance desktop machines with high end CPUs also added to the quarter to quarter increase. Typically, these machines use either AMD’s Crossfire or Nvidia’s SLI technology.

The quarter in general
JPR found that AIB shipments during the quarter behaved according to past years with regard to seasonality. AIB shipments increased 27.59% from the last quarter (the 10-year average is 12.6%).

Figures for the other suppliers were flat to declining.

The change from year to year decreased -3.8% compared to last year.

The AIB market now has just four chip (GPU) suppliers, who also build and sell AIBs. The primary suppliers of GPUs are AMD and Nvidia. There are 48 AIB suppliers, and they are customers of the AIB OEM GPU suppliers.

In addition to privately branded AIBs offered worldwide, about a dozen PC suppliers offer AIBs as part of a system, and/or as an option, and some offer AIBs as separate aftermarket products. We have been tracking AIB shipments quarterly since 1987—the volume of those boards peaked in 1999, reaching 114 million units, in 2013 65 million shipped.

This detailed 69-page report will provide you with all the data, analysis and insight you need to clearly understand where this technology is today and where it is headed. 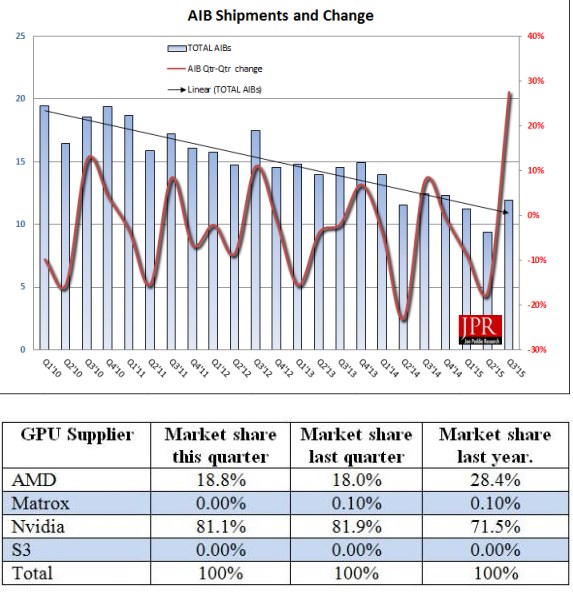