Posted on Thursday, Nov 26 2015 @ 15:10 CET by Thomas De Maesschalck
Raspberry Pi introduced its most affordable computer board to date. The new Raspberry Pi Zero costs a mere $5 and features a 1GHz Broadcom BCM2835 ARM11 based processor, 512MB LPDDR2 SDRAM, a micro-SD memory card slot, a Mini-HDMI socket, Micro-USB sockets for data and power and unpopulated 40-pin GPIO and compositive video headers. The board measures just 65mm x 30mm x 5mm and can be bought via these links.

The original Raspberry Pi Model B and its successors put a programmable computer within reach of anyone with $20-35 to spend. Since 2012, millions of people have used a Raspberry Pi to get their first experience of programming, but we still meet people for whom cost remains a barrier to entry. At the start of this year, we began work on an even cheaper Raspberry Pi to help these people take the plunge. 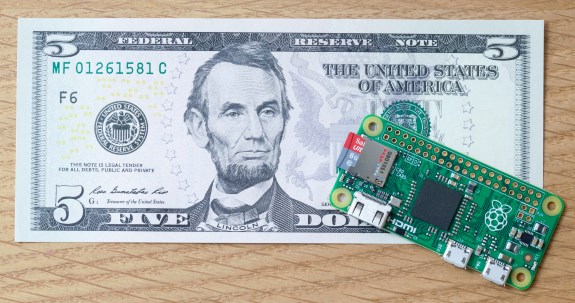 If you live in the UK, you might be interested in picking up the December issue of The MagPi magazine, it features a free Raspberry Pi Zero on the front cover!