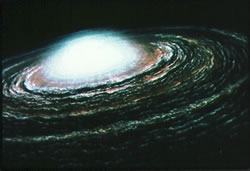 Scientists have long argued whether the chemical compounds created in the early solar system were produced with the help of the energy of the early sun or were formed by other means.

“The basic question was, Was the sun on or was it off?” says Mark H. Thiemens, Dean of UCSD’s Division of Physical Sciences and chemistry professor who headed the research team that conducted the study. “There is nothing in the geological record before 4.55 billion years ago that could answer this.”

Vinai Rai, a postdoctoral fellow working in Thiemens’ lab, came up with a solution, developing an extremely sensitive measurement that could answer the question. He searched for chemical fingerprints of the high-energy wind that emanated from the protosun and became trapped in the isotopes, or forms, of sulfide found in four primitive groups of meteorites, the oldest remnants of the early solar system. Astronomers believe this wind blew matter from the core of the rotating solar nebula into its pancake-like accretion disk, the region in which meteorites, asteroids and planets later formed.

Applying a technique Thiemens developed five years ago to reveal details about the Earth’s early atmosphere from variations in the oxygen and sulfur isotopes embedded in ancient rocks, the UCSD chemists were able to infer from sulfides in the meteorites the intensity of the solar wind and, hence, the intensity of the protosun. They conclude in their paper that the slight excess of one isotope of sulfur, ³³S, in the meteorites indicated the presence of “photochemical reactions in the early solar nebula,” meaning that the protosun was shining strongly enough to drive chemical reactions.

“This measurement tells us for the first time that the sun was on, that there was enough ultraviolet light to do photochemistry,” says Thiemens. “Knowing that this was the case is a huge help in understanding the processes that formed compounds in the early solar system.”

Astronomers believe the solar nebula began to form about 5 billion years ago when a cloud of interstellar gas and dust was disturbed, possibly by the shock wave of a large exploding star, and collapsed under its own gravity. As the nebula’s spinning pancake-like disk grew thinner and thinner, whirlpools of clumps began to form and grow larger, eventually forming the planets, moons and asteroids. The protosun, meanwhile, continued to contract under its own gravity and grew hotter, developing into a young star. That star, our sun, emanated a hot wind of electrically charged atoms that blew most of the gas and dust that remained from the nebula out of the solar system.

Thiemens says the technique his team used to determine that the protosun was glowing brightly also can be applied to estimate when and where various compounds originated in the hot wind spewed out by the protosun.

“That will be the next goal,” he says. “We can look mineral by mineral and perhaps say here’s what happened step by step.”

The UCSD team’s study was financed by a grant from the National Aeronautics and Space Administration.