Posted on Thursday, Dec 31 2015 @ 14:05 CET by Thomas De Maesschalck
ASUS closes the year with the introduction of the ROG Maximus VIII Formula, a new Z170 based motherboard filled to the brim with features. Special features include a massive CrossChill hybrid cooling solution from EK Waterblocks and the ASUS Aura RGB LED illumination system. The motherboard also features ROG Armor and lots of expansion functionality.

The latest ROG Z170 motherboard now comes with the exclusive CrossChill EK hybrid cooling block! ROG teamed up with the guys at EK to create a high-conductivity channel, so you will be ready for liquid-cooling goodness right out-of-the-box. Don’t worry if you don’t intend to upgrade to liquid-cooling straight away, because this also runs on air cooling. Why spend more money on a third-party waterblock when it’s already built-in and looks this good?

Maximus VIII Formula is an ATX gaming motherboard equipped with an LGA1151 socket for the latest 6th-generation Intel Core processor and DDR4 memory. With the click of a button, ASUS 5-Way Optimization can ensure you’re getting the maximum performance while also maximizing efficiency. The new SupremeFX 2015 used in the Maximus VIII Extreme has been carried over for incredible sound, the ESS ES9023P digital-to-analog converter (DAC) with Hyperstream technology is used, along with an ultra-low-jitter clock, Nichicon capacitors and a 2VRMS headphone amp. With all the power and technology on the inside, the exterior got just about as much attention. There is the new Aura RGB LED illumination on the motherboard and an Aura 4-pin RGB-strip header so you can place extra RGB lighting inside or outside the case! An Aura lighting control software can be used to customize the lighting effects.

The new CrossChill EK hybrid cooling block offers air or liquid cooling for up to 23?C temperature reduction to keep your MOSFETs (for power regulation) cool and calm, even while overclocking. You can simply use standard G1/4in-thread fittings. With liquid-cooling fitted, your overclocking headroom just got bigger.

Maximus VIII Formula_Crosschill EK-sROG Armor is used to reinforce the motherboard and the custom hybrid liquid-cooling block. Yes it’s functional, but you’d probably want it just for the design and the finish.

With a new board, it is to be expected ROG incorporates the newest and fastest connectivity, with NVM Express (NVMe) U.2 and M.2 for up to 32Gbps transfers, USB 3.1 Type-A and reversible Type-C for speed and compatibility, and the latest 2×2 802.11ac Wi-Fi with multi-user MIMO (MU-MIMO) wireless connections. 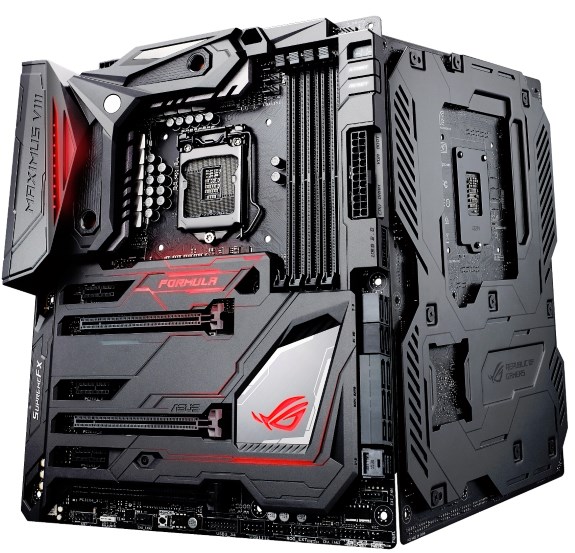