Posted on Monday, Jan 04 2016 @ 17:43 CET by Thomas De Maesschalck
Corsair is showing off the Carbide SPEC-ALPHA at CES 2016, this is a new mid-tower case that will ship in early March for $79.99. It's available in black and white/red but both cases look a bit too screamish for me.

Corsair®, a world leader in enthusiast PC hardware and components, today announced the new Corsair Carbide Series SPEC-ALPHA mid-tower gaming case. With a striking angular design and an oversized window to show off its roomy interior, the SPEC-ALPHA offers a sleek look in either black or red to complement its efficient cooling features. Perfect for PC gamers’ next rig, the SPEC-ALPHA is equipped with three 120mm fans for Direct Airflow Path cooling, controlled by a three-speed switch on the case’s front panel.

Uniquely styled with a sharp, stand-out design and LED fans, the SPEC-ALPHA gives gamers a stunning tower that looks as great as it performs. Featuring native USB 3.0 support and room for up to four SSDs, the SPEC-ALPHA is able to handle and hold the best performance PC hardware. With a large side window that perfectly frames the interior space, the case’s cable routing cutouts and tie downs ensure your system maintains a clean look inside and out. The case also allows for tool-free installation and side panel removal for easy building and access.

The neat interior combines with a Direct Airflow Path layout for optimal cooling and airflow. With no bulky 5.25” drive cage, the SPEC-ALPHA creates a clear path from the front intake straight to the CPU and GPU. The three-speed 120mm fans adapt to user needs, from near-silent operation to high-performance GPU cooling. The SPEC-ALPHA is also front 240mm radiator compatible, allowing for additional liquid-cooling upgrades. 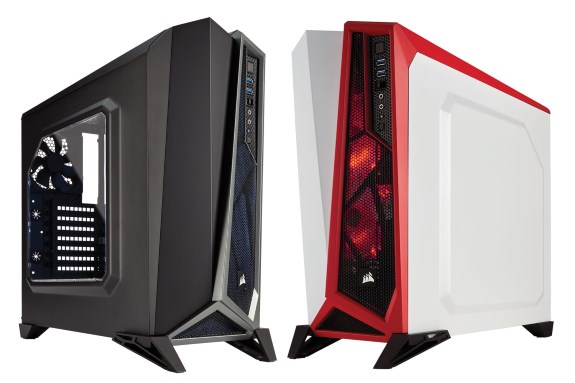