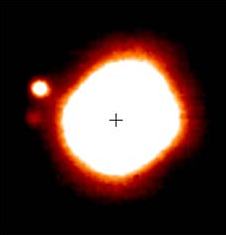 Using the Very Large Telescope at Cerro Paranal of the European Southern Observatory, researchers from the University of California, Berkeley have discovered the first triple asteroid system - two small asteroids orbiting a larger one known since 1866 as 87 Sylvia.

Because 87 Sylvia was named after Rhea Sylvia, the mythical mother of the founders of Rome, assistant research astronomer Franck Marchis and his colleagues at the Observatoire de Paris proposed naming the twin moons after those founders: Romulus and Remus. The International Astronomical Union (IAU) approved the names, to be announced in its Aug. 11 circular.

The asteroid 87 Sylvia is one of the largest known from the asteroid main belt, which is located between the orbits of Mars and Jupiter. Shaped like a lumpy potato, Sylvia is about 280 kilometers (175 miles) in diameter and is located in the Cybele outer part of the belt, about 3.5 astronomical units (AU) from the sun. An AU is 93 million miles, the average distance between the sun and Earth.

Four years ago, Sylvia was discovered to have a moon, making it one of some 60 known binary asteroids in various asteroid populations of the solar system. Seventeen of these binary systems are in the main asteroid belt and have been imaged directly either by adaptive optics systems on large, ground-based telescopes or by the Hubble Space Telescope.

Now, a second moon has been seen around Sylvia, making it a triple asteroid system. Sylvia's newly discovered moons orbit in nearly circular orbits in the same plane and direction (prograde) as the moon orbits the Earth. The closest moonlet, orbiting about 710 km (450 miles) from Sylvia, is Remus, a body only 7 km (4.4 miles) across and circling Sylvia every 33 hours. The second, Romulus, orbits at about 1360 km (860 miles), measures about 18 km (11.3 miles) across, and orbits in 87.6 hours. The asteroid Sylvia spins at a rapid rate, once every 5 hours and 11 minutes.

"People have been looking for multiple asteroid systems for a long time, because binary asteroid systems in the main belt seem to be common and formation scenarios, such as a collision between two asteroids followed by disruption and re-accretion, suggest that fragments should be orbiting bigger asteroids," Marchis said. "I couldn't believe we found one."

From two months' of observations of the moonlets' orbits, Marchis and his Paris colleagues were able to precisely calculate the mass and density of Sylvia, which shows it to be a "rubble-pile" asteroid, Marchis said. These asteroids are loose aggregations of rock presumably created when one asteroid smacked into another, disrupting one or both of them. A new asteroid formed later by accretion of large fragments from the disruption. The moonlets probably are debris left over from the collision that were gravitationally captured by the newly formed asteroid and which eventually settled into orbits around it.

"That's why most main-belt asteroids with companions have a rubble-pile structure," he said. "Because of the scenarios of their formation, we expect to see more multiple asteroid systems like this."

The density, 1.2 grams per cubic centimeter, is 20 percent higher than the density of water, which suggests it is composed of water, ice and rubble from a primordial asteroid, probably a hydrated carbonaceous chondrite, based on previous spectroscopic studies of the asteroid.

"It could be up to 60 percent empty space," said astronomer Daniel Hestroffer, one of three coauthors from the Institut de Mécanique Céleste et Calculs d'Éphémérides at the Observatoire de Paris.

The discovery was made with one of the European Southern Observatory's 8-meter telescopes (Yepun) of the Very Large Telescope at Cerro Paranal, using the telescope's infrared camera and the high angular resolution provided by the adaptive optics system (NACO). Via the observatory's promising "service observing mode," Marchis and his colleagues were able to obtain sky images of many asteroids over a six-month period without actually having to travel to Chile. DVD data of the observations were sent regularly via mail to Berkeley.

Marchis had the discovery sitting on his shelf for months, since November 2004, because he waited for the completion of the project before starting to process the data and before sending them to colleague Pascal Descamps of the Observatoire de Paris. Just as Marchis was set to go on vacation in March 2005, Descamps sent him a brief note entitled "87 Sylvia est triple?" pointing out that he could see two moonlets around several images of Sylvia. The entire team then focused quickly on analysis of the data, wrote a paper, submitted an abstract to the August meeting in Rio de Janeiro and submitted a naming proposal to the IAU.

Marchis and his colleagues hope to use the adaptive optics of the Keck and the Gemini telescopes to obtain better images of the triple-asteroid system in order to pin down the precise orbits, verify Sylvia's formation scenario and chart the system's evolution. Already they see precession of the moon's orbits resulting from the irregular shape of Sylvia.

The work was partially supported by the National Science Foundation and the Technology Center for Adaptive Optics and by the Chretien International Research Grant of the American Astronomical Society.

The fourth author with Marchis, Descamps and Hestroffer was Jérôme Berthier, also of the Institut de Mécanique Céleste et Calculs d'Éphémérides at the Observatoire de Paris. The moon now designated Romulus was discovered in 2001 by M. E. Brown and J. L. Margot using the Keck II telescope atop Mauna Kea in Hawaii