Posted on Friday, Feb 26 2016 @ 12:46 CET by Thomas De Maesschalck
Samsung announces it kicked off mass production of the first 256GB Universal Flash Storage (UFS) 2.0 memory for tablets and smartphones. The new embedded memory is smaller than a microSD card and delivers impressive performance, the specifications reveal the memory achieves read speeds of up to 850MB/s, write speeds of up to 260MB/s and up to 40k random 4k write IOPS.

“By providing high-density UFS memory that is nearly twice as fast as a SATA SSD for PCs, we will contribute to a paradigm shift within the mobile data storage market,” said Joo Sun Choi, Executive Vice President, Memory Sales and Marketing, Samsung Electronics. “We are determined to push the competitive edge in premium storage line-ups – OEM NVMe SSDs, external SSDs, and UFS – by moving aggressively to enhance performance and capacity in all three markets.”

The new Samsung UFS memory satisfies needs for ultra-fast speed, large data capacity and compact chip size in high-end smartphones. It is based on the company’s most advanced V-NAND flash memory chips and a specially-designed high-performance controller. The UFS memory handles up to 45,000 and 40,000 input/output operations per second (IOPS) for random reading and writing respectively, over two times faster than the 19,000 and 14,000 IOPS of the previous generation of UFS memory.

For sequential reading, the 256GB UFS takes advantage of two lanes of data transfer to move data at up to 850MB/s, which is nearly twice as fast as a typical SATA-based SSD used in PCs. In terms of sequential writing, it supports up to 260MB/s, which is approximately three times faster than high-performance external micro SD cards.

As a result, the new 256GB UFS memory is capable of supporting seamless Ultra HD video playback and multitasking functionality on large-screen mobile devices, such as watching 4K Ultra HD movies on a split screen, while searching image files or downloading video clips. Its 256GB capacity also allows an unmatched amount of data storage on the mobile device itself. For example, one 256GB UFS chip can store about 47 full HD movies, therefore enabling much greater flexibility in handheld consumer electronics.

In addition, with the advent of next-generation smartphones that support the USB 3.0 interface, users will be able to transfer data much faster between mobile devices. The USB 3.0 interface will allow sending a 5GB-equivalent Full-HD video clip (average 90-min. movie size) in 12 seconds. Within this new storage environment, mobile users will get to take full advantage of the performance benefits of Samsung’s latest UFS memory.

Samsung announced availability of its 128GB UFS memory in February of last year. In only a year, it has doubled the capacity and speed of UFS memory, which should spur further growth of the mobile marketplace. Samsung will extend its premium storage line-ups that are based on its advanced V-NAND flash memory including the new 256GB UFS, and increase their production volume in line with increases in global demand. 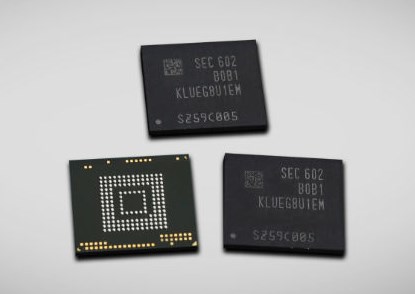