Posted on Friday, Feb 26 2016 @ 13:50 CET by Thomas De Maesschalck
Jon Peddie Research published its year-end report about 2015 GPU shipments. The company notes overall year-to-year GPU shipments were down 14 percent, with desktop graphics decreasing 9 percent and notebooks down 17 percent. The market did rebound towards the end of the year as Q4 2015 shipment were up 2.4 percent and the GPU market is outperforming the PC market. 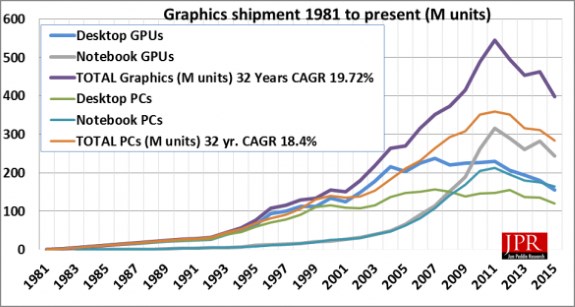 The GPU market and the PC market in general, seems to have found its new normal. The Gaming PC segment, where higher-end GPUs are used, was once again the bright spot in the overall PC market for the quarter.

The GPU market is rebounding and outperforming the PC market, which is stabilizing.

Graphics processors, stand-alone discrete devices, and embedded processor-based GPUs are ubiquitous and essential components in all systems and device today from handheld mobile devices, PCs, and workstations, to TVs, servers, vehicle systems, signage, game consoles, medical equipment, and wearables. New technologies and semiconductor manufacturing processes are taking advantage of the ability of GPU power to scale. The GPU drives the screen of every device we encounter—it is the human-machine interface.

The fourth quarter is typically flat to up in the seasonality cycles of the past. For 2015, the 4th quarter saw a 2.4% increase from last quarter, and was above the ten-year average of -3.4%.