Posted on Monday, Feb 29 2016 @ 15:41 CET by Thomas De Maesschalck
Russian site GameGPU managed to do some early benchmarks in the closed alpha version of Doom. The results are quite interesting as they show AMD cards performing much better than their NVIDIA counterparts than in older benchmarks, something also seen in tests like Ashes of the Singularity.

The 4K benchmark results are listed below but the site also offers results from the 1920 x 1080 pixels and 2560 x 1440 pixels resolutions. Perhaps platform optimizations will help balance things but it's quite surprising to see the Radeon R9 290 beating the GeForce GTX 980 Ti in the Full HD and 2560 x 1440 benchmarks. The NVIDIA cards do a bit better in the 4K test but are no match for AMD's Fiji-based cards: 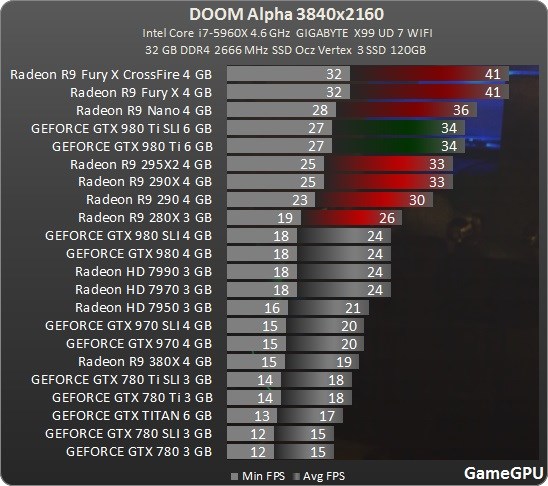