Posted on Tuesday, Mar 08 2016 @ 15:32 CET by Thomas De Maesschalck
German tech site Golem claims SK Hynix will kick off mass production of 4GB HBM2 in Q3 2016, with an 8GB version to follow in Q4 2016. There's also a 2GB version but details on when this configuration will enter mass production are unknown. The 2GB and 8GB chips will be used by video cards, the 8GB version is primarily targeted at the HPC server markets.

As we expect the first batch of next generation graphics cards, packing HBM2, from both AMD and Nvidia before Q3 2016 these will obviously use memory sourced from either SK hynix small scale production, or perhaps the 2GB HBM2 line from SK hynix, or Samsung HBM2 DRAM. We learnt in January that Samsung has already started mass production of 20nm 4GB HBM2. Samsung will also progress to 8GB HBM2 production at a point later this year. 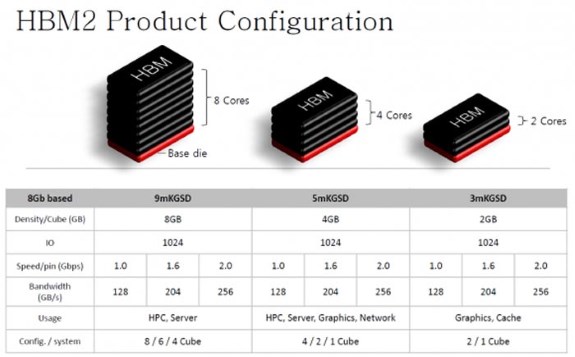