Posted on Thursday, Mar 17 2016 @ 13:15 CET by Thomas De Maesschalck
MSI rolls out its Vortex, a new Windows 10 based mini gaming PC that's housed in a 6.5l cylindrical case. There are two versions of the Vortex, both feature the Intel Core i7-6700K processor and a 256GB SSD plus 1TB HDD. The high-end version features two NVIDIA GeForce GTX 980 video cards in SLI while the slightly cheaper version offers GeForce GTX 960 SLI.

Other features include up to 32GB DDR4-2133, Thunderbolt 3 support, four USB 3.0 ports, HDMI 1.4, Mini-DisplayPort 1.2, Killer Gaming Network E2400 NICs and the Killer Wireless-AC 1535 card. All of this ships in an attractive case with adjustable LED light effects and a special vortex-like cooling system with a single top-mounted fan that draws the hot air out of the case. You can find the full specifications over here.

Saying we poured our blood, sweat and tears isn’t enough to describe the work put into designing and engineering the Vortex. We’re proud to say that it has paid off. With an outside-the-box design, literally, the Vortex is an engineering feat that goes against all the status quos of desktop PC’s to bring about a revolutionary take on desktop gaming.

Everything you know is about to change. Standing at a mere 10.5” high, weighing as little as 8.8lbs, and measuring in at 6.5L, the Vortex pushes more power per inch than most mid to full size tower gaming PC’s without the having to deal with the same bulkiness or weight. 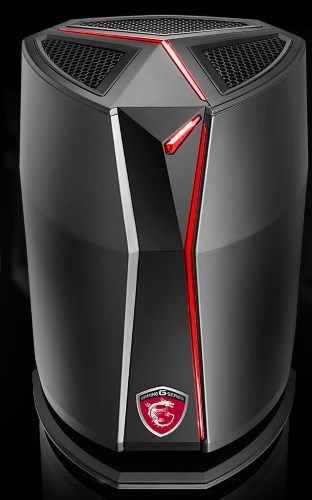