The Broadwell-EP lineup will be known as Xeon E5-2600 v4 and will feature up to 10 cores and 20 percent more L3 cache than its predecessors. The slide claims Broadwell-EP will deliver an 18 percent average performance increase.

This would mean Intel leveraging the 14 nm process to cram 10-core chips at the price of an 8-core chip from the previous generation, 8-core chips at the price of 6-core ones, and so on. The same slide mentions that "Broadwell-EP" offers, on average, 18% more performance than "Haswell-EP." Intel is also hinting at native support for DDR4-2400 MHz. Haswell-EP supports DDR4-2133 MHz. 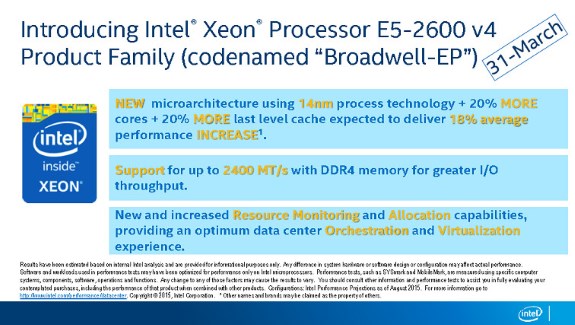