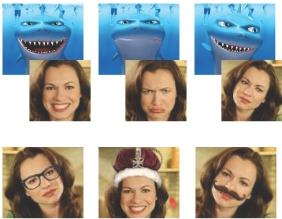 Today Logitech launched the Video Effects software, a program which enables users of the QuickCam Fusion webcam to transform their image into 3D animated chracters whose expressions and movements precisely mimic people's facial expressions. QuickCam Fusion users can also use the software to add animated accessories, such as eyeglasses, to their on-screen image. This piece of software is compatible with all popular IM clients such as MSN Messenger, AIM and Yahoo Messenger.

The Logitech Video Effects software is an advancement of Logitech's face-tracking software, allowing webcams to identify, follow and focus on a human face in the video window as the face moves within the camera's field of view. Using technology from California-based Neven Vision, this new software maps facial expressions by tracking up to 22 points on the face, around the eyes, eyebrows, and mouth. The avatar then mimics the facial movements and expressions determined by those points, moving fluidly as the person participates in a video call or a video instant messaging session. When using avatars, the webcam user's video image is completely replaced by the avatar. Similarly, the tracked facial points allow the software to appropriately position the animated accessories, such as eyeglasses over the eyes. In this case, the webcam user's video image will be altered, but not entirely replaced.