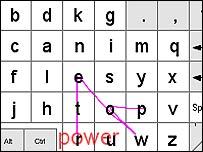 IBM researchers today presented a new way to write on a handheld device like a PDA or mobile phone, based on the idea of remembering word patterns and connecting the dots. The team has developer software that works by recognising the patterns of words, and they believe it will become one of the major interaction methods for mobile devices.

The technology is called Shark (Shorthand-Aided Rapid Keyboarding), and it will be ready to go commercial within the coming months.

"We realised that people remember patterns and not letters," explained Dr Zhai. "There is some higher level learning that is encoded in human memory."

In order to tap into this unrealised potential, the IBM team came up with software that works by using geometrical patterns to represent words.

Instead of tapping out letters or writing a word on screen, you trace each letter in a single, fluid stroke. The keyboard on screen shows the shape of the word.