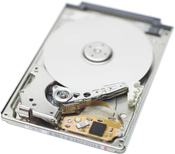 Toshiba has remained an industry leader in HDD development with innovations in the mobile HDD space such as the automotive market where Toshiba is currently the world's leading supplier of 2.5-inch, automotive-class HDDs with more than 80 percent market share according to the analyst research firm TSR. In addition, Toshiba introduced the world's smallest hard disk drive at 0.85 inches according to the 2005 Guinness World Records and was the first company to accomplish production of HDDs using Perpendicular Magnetic Recording (PMR), setting a new record in areal density in the 1.8-inch form factor by boosting the capacity of a single 1.8-inch hard-disk platter to 40 gigabytes.

"Toshiba has reached yet another important milestone in the HDD industry, a testament to our continued investments in technology leadership and delivering the right products for our customers," said Scott Maccabe, vice president and general manager, Toshiba SDD. "The company recognizes the strength and longevity of its flagship 2.5-inch HDD as a platform for the development of other form factors and innovative mobile devices. We remain committed to continued technology advancements in small form factor HDDs and bringing to market additional technologies that will keep Toshiba in the forefront of the industry."

Toshiba's mobile hard disk drives are available in 0.85-inch, 1.8-inch and 2.5-inch form factors in capacities ranging from 20GB to 120GB capacities. Toshiba continues to pioneer perpendicular recording and will incorporate this technology into its entire line of HDDs by 2006.