Posted on Sunday, May 29 2016 @ 11:55 CEST by Thomas De Maesschalck
An employee of AMD's Radeon Technologies Group accidentally revealed a bit too much on Twitter. The (now deleted) tweet revealed a photo of Doom running on a curved 144Hz display with FreeSync support. The game ran at a 1440p resolution but the interesting thing about the photo is the card used to render the game, which is identified as the "Radeon RX 480". This demonstration was given at the AMD Polaris Tech Day in Macau.

PC World notes the display is the Lenovo Y27F, it's actually a 27" 1080p screen so the 1440p is achieved using AMD's Virtual Super Resolution.

There's not a lot of information to go on here but the implied message seems to be that the "RX 480" could be a really good price/performance card. It seems this card is based on the Polaris 10 and the "RX 480" either suggests the final retail name is yet to be decided or perhaps the adoption of a slightly different naming scheme.

The Radeon x80 line has typically hovered around the $200 to $250 price point. And second, that it might be fast. The current-gen R9 380 barely hits 60fps in Doom at 1080p, according to TechSpot’s extensive benchmarks. Team Red’s showing it off at Polaris Tech Day on a monitor capable of cranking out more than twice that many frames—though there's nothing explicitly saying the GPU itself hits those lofty heights. It's likely just to show the card running somewhere above 60Hz in action. 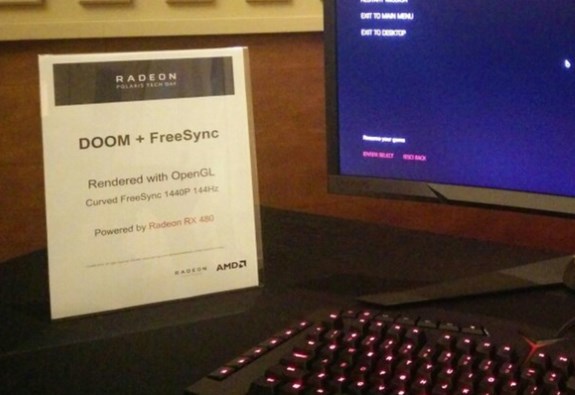