Posted on Tuesday, May 31 2016 @ 14:01 CEST by Thomas De Maesschalck
Operating system usage statistics from StatCounter reveal Windows 10 is gaining ground and is now the most widely used OS in over a dozen countries. While Windows 7 is still the most used operating system in most parts of the world, Windows 10 has beaten it in the US, Canada, Australia, the UK, France, Scandinavia and a couple of other, smaller countries.

Windows 10 now has a marketshare of 28.82 percent in the US, while Windows 7 takes the second place with 28.65 percent. The new OS has seen recently fast adoption but that's no surprise considering how hard Microsoft is pushing this free upgrade.

According to StatCounter, as tweeted by David Storey, a web platform engineer for Microsoft Edge, Windows 10 has recently overtaken Windows 7 as the most used desktop OS in North America. The OS reportedly now has 28.82% market share, while Windows 7 is now at second place with 28.65%. Mac OS X is trailing behind in third place, with 16.16%, while Windows 8.1 and Windows 8 are at 8.25% and 5.93%, respectively. 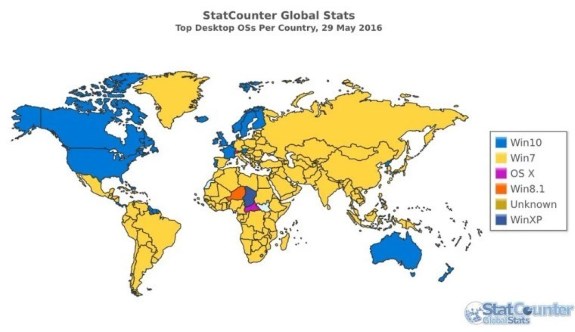