NVIDIA is expected to add a new mainstream card to its Pascal lineup later this month, this will be the GP107 based GeForce GTX 1050 series. WCCF Tech spotted the cards on the website of an e-tailer, which lends some further credence that a launch is nearby.

The GeForce GTX 1050 on the other hand will follow a bit later on October 26th, with pricing anticipated to be around the $119 mark. If the rumors are right, this is a cut-down version of the GP107 with 640 CUDA cores and just 2GB GDDR5 memory, but the clockspeeds will be a bit higher as the rumors point to a base clock of 1354MHz and a Boost clock of 1455MHz. Both cards have a TDP of 75W or less.

The listed models include several custom cards from ASUS, MSI and Gigabyte. The GTX 1050 Ti is listed in MSI Gaming X, MSI Gaming and ASUS STRIX variants. All three cards have 4 GB VRAM configured on them which confirms that the GTX 1050 Ti will only be available with 4 GB memory. The GTX 1050 has four models listed which include MSI Gaming, Gigabyte G1 Gaming, Gigabyte Mini ITX OC and ASUS STRIX. All 1050 series models have 2 GB VRAM configured on them. 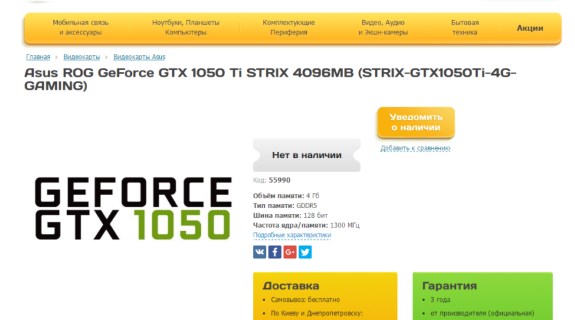