Posted on Friday, Oct 07 2016 @ 14:06 CEST by Thomas De Maesschalck
Over at the Oculus Connect conference, Oculus developers announced a couple of new software tricks that make it possible to enjoy virtual reality on more affordable PC hardware. This is possible by using "Asynchronous Spacewarp" in combination with the previously released "Asynchronous Timewarp".

Previously, Oculus recommended minimum hardware specifications capable of rendering VR games at a framerate of at least 90fps, but thanks to a number of software-based interpolation/reprojection methods it's now possible to get an almost as good experience with just 45fps from the source hardware.

What this means is that the absolute minimum hardware for the Oculus Rift is now a system with an Intel Core i3-6100 (or AMD FX 4350) CPU and a NVIDIA GeForce GTX 960-class video card, instead of the previous minimum of a Core i5-4590 with a GeForce GTX 970. Oculus still recommends better hardware but claims Asynchronous Spacewarp is good enough if you're limited to a smaller budget.

The Tech Report offers a bit of details about how Asynchronous Spacewarp promises to smooth VR gaming on mainstream hardware:

Asynchronous Spacewarp aims to sort out "positional judder," the barf-inducing spikes that occur when there's a dip in the framerate after a sizable head movement. The algorithm takes two frames, examines the differences between them, and generates a synthetic frame for the headset. Spacewarp's processing delivers one frame of each type in sequence: one "real," then one that was "spacewarped." This allows the Rift to display a scene at 90 FPS while only getting 45 FPS from the source app. That's a much more palatable requirement for GPUs worldwide to handle, particularly but not only for mobile devices. This experience may not be comparable to a native 90 FPS, but it could make VR more accessible, at least.

This makes virtual reality cheaper than ever. At the conference, Oculus said CyberPowerPC will be offering a $499 AMD-based Oculus Ready PC. 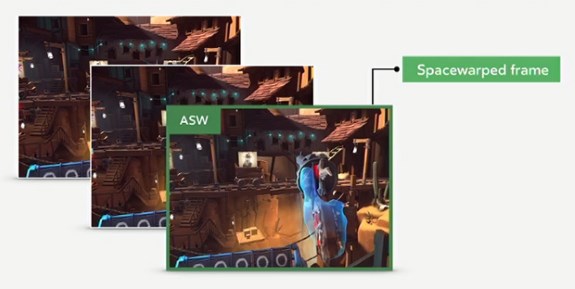