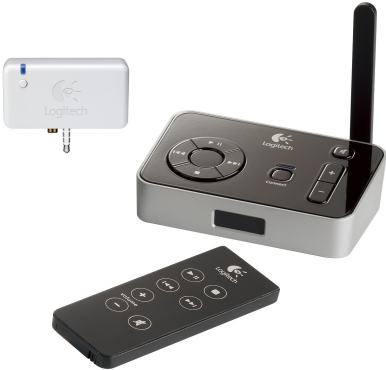 Creating accessories for the Apple iPod is a lucrative market and Logitech knows it. The company already launched a bunch of high priced headphones and speaker systems for this popular digital audio player and today they present the Logitech Wireless Music System for iPod, which enables users to wirelessly connect their iPod to a stereo or speaker system. And while the name of this device clearly states iPod, it will work on every portable media player with a standard 3.5mm headphone output, and not just solely on the iPod.

The Wireless Music System for iPod is a complete, two-piece, plug-and-play solution. It comes with a music transmitter to connect to any digital audio player's headphone port and a music receiver to plug into a stero receiver of multimedia speakers through an RCA port or a 3.5mm jack.

Logitech says the Wireless Music System for iPod is perfect for dinner parties. From the couch or dining room table, people can skip tracks or hop from playlist to playlist, using their player as a remote control.

This gadget uses Logitech's Music Anywhere wireless technology and the company says the transmitter is able to send audio streams directly to the receiver at a range of up to 10 meters (33 feet).

The device will be available in October for a suggested retail price of $149.99.