The slide below reveals the Founders Edition will use 8+6-pin PCIe power connectors and from the renders shown by AIBs like EVGA we know some custom models will have two 8-pin connectors. 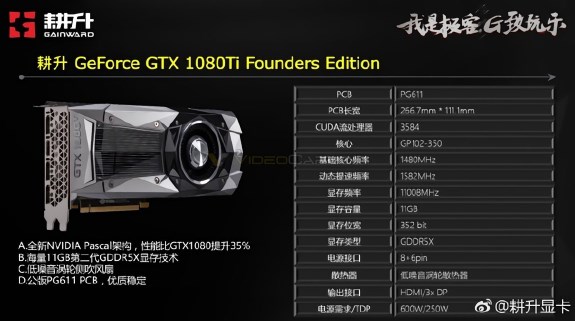 The site also made a comparison of the GTX 1080 Ti PCB versus the Titan X (Pascal) PCB. Both cards use the same PG611 board but there are a couple of differences. The GTX 1080 Ti has one memory chip less and it no longer has a DVI port. NVIDIA's partners will likely equip the custom cards with DVI but NVIDIA decided to get rid of it to make the air exhaust of the cooler larger. Furthermore, the comparison shot of the PCBs also shows that the GTX 1080 Ti has more advanced power delivery than the Pascal-based Titan X.

You can expect reviews and availability of the GTX 1080 Ti on March 10. Initial supply will likely consist exclusively of Founders Edition models as NVIDIA's partners did not have a lot of time to prepare custom models.