Posted on Thursday, Mar 09 2017 @ 12:35 CET by Thomas De Maesschalck
Last week Biostar teased a Socket AM4 Mini-ITX board based on the X370 chipset and today the company introduces two B350-based motherboards that use the Micro-ATX form factor. The two boards in question are the RACING B350GT3 and RACING B350ET2, which ship for $109 and $79, respectively. 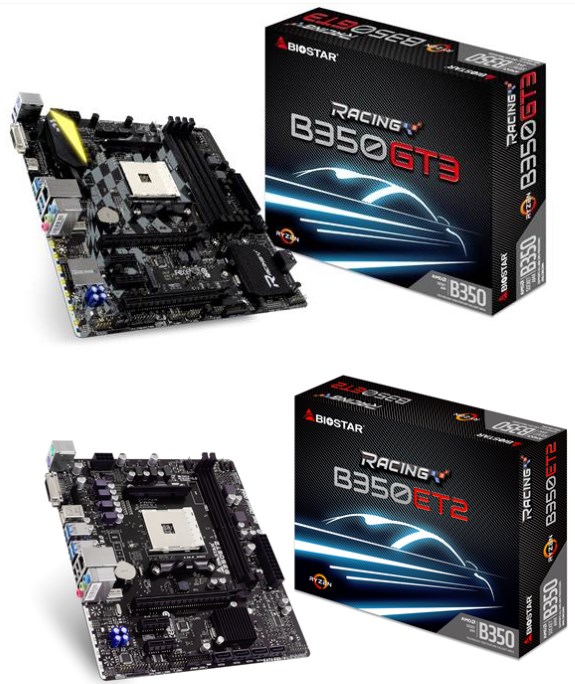 BIOSTAR sets the stage for the micro-ATX AM4 market as the pioneer in including RGB LED function in its micro-ATX B350 motherboards. The BIOSTAR RACING B350GT3 is ideal for system builders and gamers that want an RGB lighting-capable system with the latest AMD B350 chipset.

In addition to this, the BIOSTAR RACING B350ET2 sets itself apart from the competition by introducing 1.5V USB charger functionality and SATA POWER characteristics, perfect for iCafe owners who want to feature LED-equipped gaming headphones from the USB.

The new BIOSTAR RACING Series motherboards for AMD AM4 sockets support the latest AMD RYZEN 7 8-core processors and feature support for DDR4-2667 memory via the B350 chipset which offers plenty of connectivity for upgraders. BIOSTAR uses 100% solid capacitors on both motherboards for guaranteed durability and Hi-Fi audio for a great entertainment and listening experience.

The RACING B350GT3 and RACING B350ET2 both comes bundled with World of Tanks premium gifts, which is exclusive for Asia server only and will have an MSRP of $109 and $79 respectively.

BIOSTAR RACING 2nd-Gen Series Features
Level up your gaming experience with BIOSTAR RACING Series features designed to give gamers the edge they need in game to both enjoy and excel at the same time.

FLY.NET (for RACING B350GT3)
AMD AM4 RACING motherboards come with the new networking solution for gaming: the DRAGON LAN together with FLY.NET bandwidth management software which automatically detects the best settings for your bandwidth, maximizing priority to those that need it the most meaning games will receive a smoother experience with improved lower latencies and an ultra-stable network connection when running multitple software that utilize the network.

VIVID LED DJ (for RACING B350GT3 & RACING B350ET2)
Design your own LED visual effects and custom lighting with the exclusive RACING Series software from BIOSTAR: the VIVID LED DJ utility. With multiple customization and preset options to customize the color schemes and light effects of your motherboard, be ready to show-off your personal style with your gaming system with BIOSTAR RACING Series.

5050 LED Fun Zone (for RACING B350GT3 & RACING B350ET2)
The brand-new 5050 LED Fun Zone comes with two 5050 LED headers to bring more colorful lighting options to DIY lovers. This improves upon the original feature allowing for a much more flexible way of adding lights to your system.

DUAL BIOS (for RACING B350GT3)
The new BIOSTAR RACING Series motherboards feature excellent DIY tools for ease-of-use and maintenance including dual BIOS protection for deep-level of system protection. The DUAL BIOS allows users to manually select between two BIOS, keeping each BIOS chip independent from each other to protect the system in the occurrence of a BIOS corruption. Easily flash back a working version or maintain two different versions for flexibility.

USB Music Power (for RACING B350ET3)
BIOSTAR is dedicated to delivering the best audio and the USB Music Power, targeted for iCafe audiences, is the perfect technology for delivering precise and stable power to USB gaming headsets for clear audio, both for games and music.

Immersive Gaming Experience with World of Tanks
BIOSTAR RACING Series motherboard users will receive free invite codes for content bonus packs which includes the premium gifts for World of Tanks gamers in the Asia server. World of Tanks is one of the most immersive games out right now and superb graphics give the game a realistic feel and experiencing it with the new BIOSTAR GeForce GTX 1050 Ti makes the game more fluid so you get immersed in the true World of Tanks experience.