Posted on Sunday, Mar 19 2017 @ 22:01 CET by Thomas De Maesschalck
I have no idea why Intel is launching its first high-performance Optane server products on a Sunday but that's exactly what the chip giant did. The company shows off its SSD DC P4800X, which features 20nm 128Gbit 3D Xpoint dies. The first product has a storage capacity of 375GB, it promises very low latency and also much higher endurance than NAND flash memory.

While NAND memory works with pages that store kilobytes of data, the 3D XPoint memory of the Intel Optane series allows bit-level access. A nice writeup covering the technical details can be read at The Tech Report.

The first 375GB DC P4800X SSDs from Intel ship today for $1,520 and should become available in larger quantities in the second half of this year. It's not clear what "initial" availability means, it's probably very limited considering there aren't even any reviews. All data we have right now originates straight from Intel.

Optane can extend the capacity of a system's DRAM thanks to its reliably low latency. That's because paging to an Optane SSD doesn't carry the uncertainty or nearly as much of the performance penalty of paging to NAND devices or a hard disk. To prove this point, Intel showed that GEMM, a type of workload commonly used in deep learning, can run (in a highly optimized form) at 2605 GFLOPS with 128GB of DRAM and 1.5TB of P4800X capacity installed, compared to 2322 GFLOPs with 768GB of DRAM alone installed. At $6080 for the Optane SSDs and roughly $2100 for a 128GB DDR4-2400 DIMM, the cost of crunching those large data sets could be more favorable with Optane, too. Achieving 768GB of DRAM with 128GB DDR4-2400 ECC DIMMs would require almost $13,000 of memory. 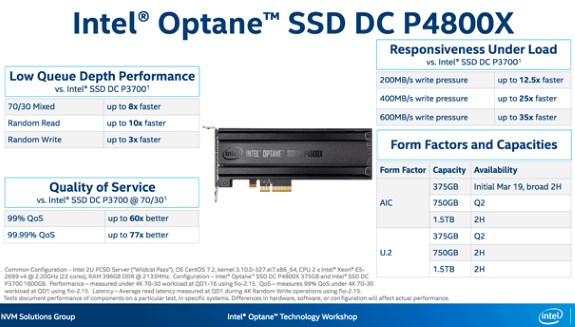