VideoCardz came across evidence that NVIDIA is working on a mobile version of its GeForce GTX 1080 Ti video card. The new model uses the MXM form factor and a leaked GPU-Z screenshot reveals the chip has 11GB GDDR5X with a 352-bit memory bus. If the details are correct, the mobile GeForce GTX 1080 Ti will get the same CUDA core configuration as well as the same clockspeeds as the desktop model.

As a proof a screenshot was posted, clearly showing 11GB of GDDR5X memory and 352-bit bus. Of course, there is no Pascal GP104 with such configuration, and such memory bus is only available with one chip — Pascal GP102.

Although the new card was not named directly in the post, it was discovered that the filename actually does mention GTX 1080 Ti: “KM3_1080_Ti_SCv2.jpg”.

Judging from the GPU-Z screenshot, the new GTX 1080 Ti for notebooks would feature the exact same GPU configuration as a desktop variant of 1080 Ti with 3584 CUDA cores. Bear in mind that the screenshot is likely showing wrong TMU and ROP counts.

It's believed to be an early development board so the final version could still be a couple of months away from us. 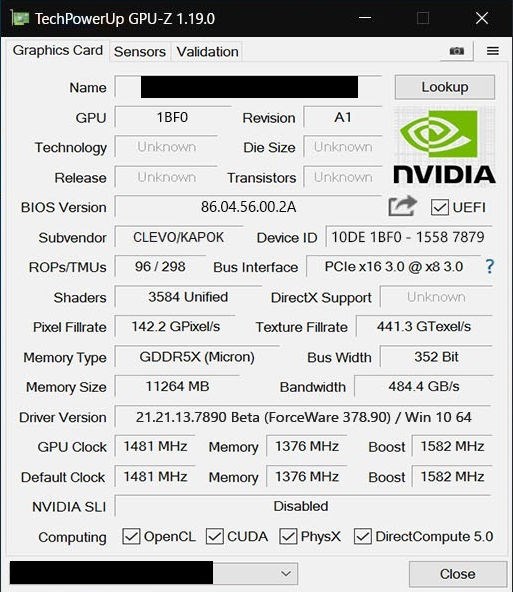