Intel's Performance Per Watt to be bad for AMD? 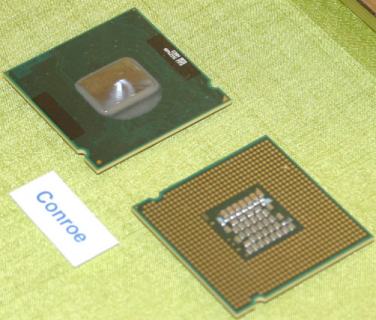 AMD, and its users, sometimes try to make fun of Intel but it looks like he (Intel) who laughs last, laughs best. AMD beat Intel by delivering its 64-bit processors Athlon 64 and Opteron two years ago and by having a slight overall performance edge over Intel's offerings. AMD's offerings also have a better dual-core design and on average they use less power. The only segment where Intel is still the obvious number one is the mobile segment, where their Centrino continues to score high.

There used to be a MHz race in the past but AMD couldn't keep up with Intel's high clockspeeds so they introduced performance ratings. The main reason for this is Intel's Pentium 4 NetBurst architecture which focused on high clockrates. Back in 2003 the chip giant claimed to be able to deliver 10GHz processors by 2005 but high power consumption prevented Intel from doing so. So Intel recently decided to make a drastic switch by developing a new processor architecture which combines the best features from the NetBurst architecture with the Pentium M architecture.

Anyway, these performance ratings are based on a formula and were introduced by AMD to show consumers that AMD's processors are as fast as Intel's, despite having a lower clockrate. This was called the 'busting the MHz myth', as many people used to believe MHz was the only thing that matters. But it isn't. Intel later followed by introducing performance ratings as well.

To many people's surprise AMD recently sued Intel for unfair competition and a few days ago they also posted a challenge in several big U.S. newspapers. AMD challenged Intel to a dual-core server processor duel but Intel's CEO Paul Otellini said at the IDF he wasn't interested in this. He said he always thought that companies and products are best judged in the marketplace, and that he will leave it at that.

Intel, who owns more than 80 percent of the x86 desktop processor market, wants to be on top again and presented very impressive plans for the coming years. Their new marketing buzz word appears to be Performance per Watt. The main plan for Intel's future appears to be offering more performance and a lower power consumption. Today's high-end desktop processors have reached a huge thermal design power of 130W and Intel will try to reduce this to 65W for future generations. There are even plans for a whole new category of processors for devices called handtops, which will only consume 0.5W.

At the Intel Developer Forum the chip giant presented impressive plans with their next-generation power-optimized processors which will be launched in 2006. They claim the upcoming Conroe processor for desktop systems will offer five times the performance/watt of the Northwood which was introduced in 2003.

It isn't sure how AMD will react to Intel's performance per watt buzz as this is something were Intel will have a clear advantage over the next few years and AMD's plans for the future are quite vague. Although AMD recently said it will try to reduce the power consumption of its future processors and they are also working on a new core which will be released somewhere in 2007 with larger cache memories and support for DDR3 memory.

AMD managed to boost its marketshare with its 64-bit Opteron, Athlon 64 and Turion 64 processors but they are still a small player and I guess they will have a hard time to keep up with Intel's new power-optimized processors.

What do you think? Are Intel's new plans just a big bunch of marketing buzz or will they really run over AMD this time?