Posted on Wednesday, Apr 19 2017 @ 15:57 CEST by Thomas De Maesschalck
Biostar is on a roll recently with lots of motherboard announcements. Today the company shows off the RACING X370GTN and the RACING B350GTN, world's first Mini-ITX motherboards for the AMD Ryzen platform. The first one uses the X370 chipset and is priced at $129, while the second motherboard is based on the B350 and has a $109 MSRP. 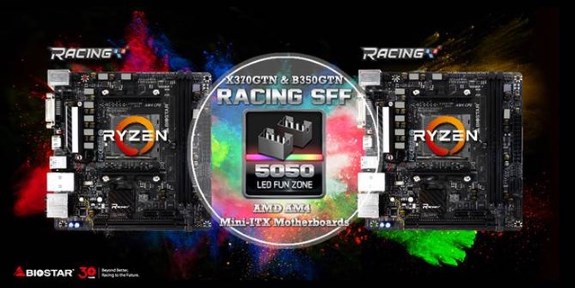 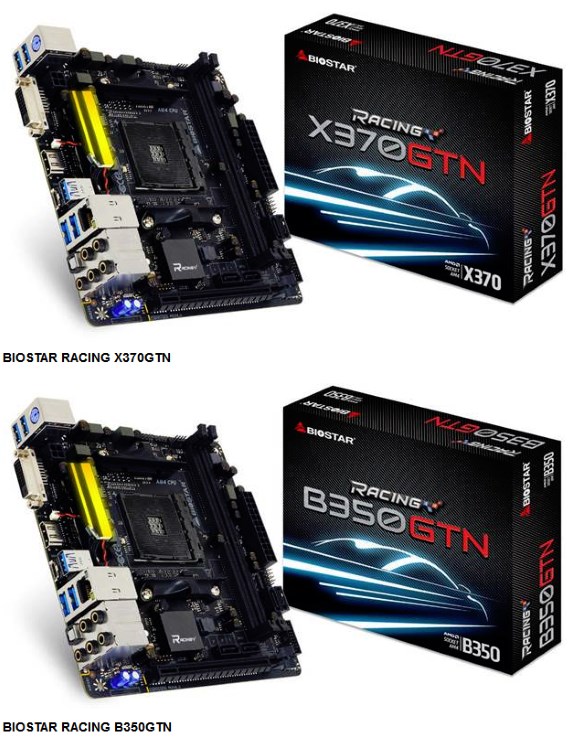 BIOSTAR is thrilled to announce the latest addition to the growing mini-ITX family of BIOSTAR motherboards with the introduction of the world's first mini-ITX motherboards for AMD AM4 platform and the first mini-ITX RGB LED-capable motherboards with AMD X370 and AMD B350 chipsets. BIOSTAR is pleased to welcome the new BIOSTAR RACING X370GTN and RACING B350GTN mini-ITX motherboards into the RACING Series family. Both motherboards aim to deliver the best balance of form and function, delivering the full potential that the AMD AM4 platform offers especially with AMD RYZEN CPUs, all in a small package. The BIOSTAR RACING X370GTN and RACING B350GTN comes equipped with BIOSTAR 2nd-gen RACING features like 5050 LED Fun Zone with dual 5050 LED header for DIY customization, the BIOSTAR exclusive VIVID LED DJ with full RGB LED control that lets enthusiasts design their own system lighting with precise control. Together with that, BIOSTAR also adds performance and quality features for maximum system performance and stability.

With the multi-threaded performance of AMD RYZEN CPUs, it's a great choice for content creators and professionals looking for a highly-accessible, high-performance processor to help them in their work and together with BIOSTAR RACING Series AM4 mini-ITX motherboards, it makes it easy to maximize your workspace by building a system with a relatively small footprint that does big things.