I wasn't sure if it was worth posting this but it seems like a slow news day so I'll briefly cover that it is possible to flash a Radeon RX 480 to a Radeon RX 580. Users who did this discovered that with the new firmware, their Radeon RX 480 can clock higher as it enables you to bypass some artificial overclocking limitations.

The newly-christened RX 580 thus smiles for the screenshot, with a stock clock of 1411 MHz, higher than most overclocks possible with the RX 480 cards, probably due to increased voltages on the BIOS level. The user then tested the card on The Witcher 3 and Furmark, with no problems having been reported. Just remember to back-up your BIOS with GPU-Z and make sure to peruse our forums for some details on this flashing process before you get the proverbial grease on your elbows.

I'm just not sure if it's worth doing this as a mere firmware update doesn't magically turn your old RX 480 into a RX 580. The new model basically uses the same Polaris chip, but is manufactured on a newer 14nm node and features enhanced power circuitry to enable higher performance. The RX 480 cards were handicapped by their 150W TDP goal and a 6-pin PCIe connector, whereas the RX 580 has a TDP of 185W. The risk/reward doesn't seem that exciting in this case. Full details at TechPowerUp 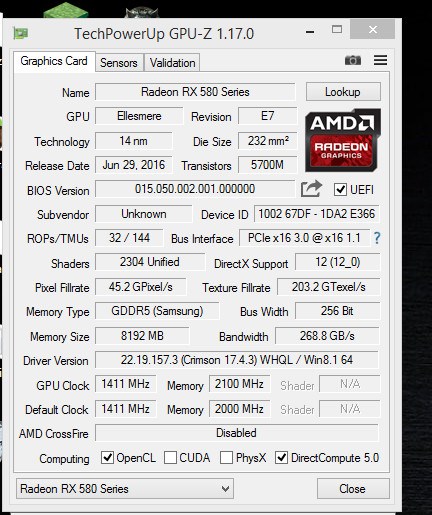