Posted on Friday, Apr 21 2017 @ 11:36 CEST by Thomas De Maesschalck
Various companies around the globe are working on realizing the concept of a flying car. This has long been a dream but various prototypes are getting tested, including a prototype from Munich-based Lilium Aviation. This German startup reached an important milestone yesterday as it performed the first test flight of its all-electric, two-seater, vertical take-off and landing (VTOL) prototype. The flying car was piloted remotely but manned tests are expected to follow soon.

Lilium claims its electric aircraft has a range of 300 kilometers with a maximum cruising speed of 300km/h.

In a video provided by the Munich-based startup, the aircraft can be seen taking off vertically like a helicopter, and then accelerating into forward flight using wing-borne lift.

The craft is powered by 36 separate jet engines mounted on its 10-meter long wings via 12 movable flaps. At take-off, the flaps are pointed downwards to provide vertical lift. And once airborne, the flaps gradually tilt into a horizontal position, providing forward thrust. 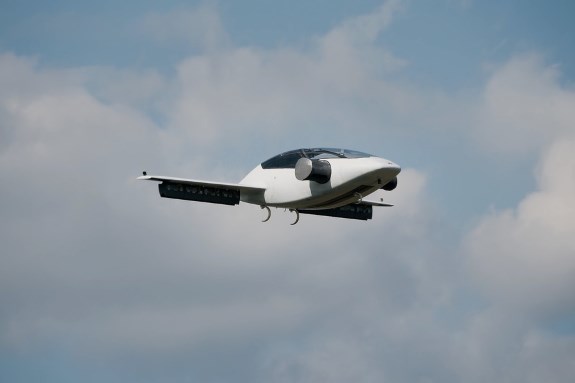