Posted on Tuesday, May 02 2017 @ 11:49 CEST by Thomas De Maesschalck
Marketshare data from the usual analysts firms will probably arrive soon but in the meantime WCCF Tech pulls attention to the latest data release from PassMark. This data is based on the benchmark submissions that are entered into the company's database in any given quarter, so it's not based on the number of new systems sold but rather a representation of what chip is used by PassMark's users.

The PassMark data shows that for the first time since Q1 2014, AMD has managed to recapture some of the marketshare it lost to Intel. Of course, there's still a huge rift between the two companies and the 2.2 percent gained in Q1 2017 doesn't change a whole lot for AMD.

Around 20.3 percent of active PassMark users now use an AMD processor, versus roughly 79.7 percent that has an Intel-based system.

The last time AMD saw similar share gains was in Q4 of 2012, which amounted to 3%. At the time the company’s newly introduced Piledriver FX CPU and APU lineups had been on the market in their entirety throughout the fourth quarter. By comparison only three Ryzen SKUs were available in Q1 of this year, only during March and only for desktops, which clearly underlines the great magnitude of the market’s appetite for Ryzen processors. 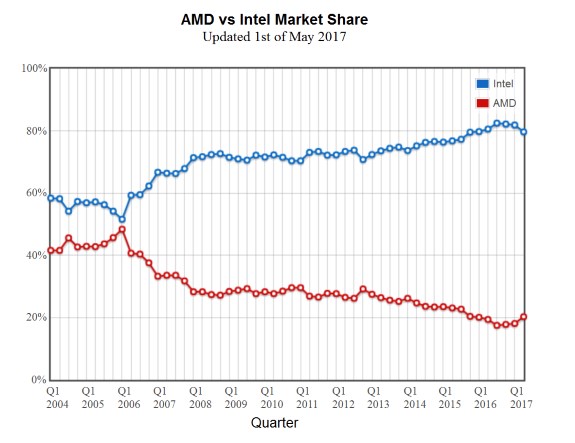