Also at the GPU Technology Conference in San Jose, NVIDIA revealed a demonstration of multi-user virtual reality on a single system. To achieve this, the company uses a system with four NVIDIA Quadro P6000 GPUs. This enables up to four people to collaborate or interact with each other in a virtual environment. This demo isn't really intended for gamer, but rather for professional or educational applications.

Multi-user systems open up opportunities to use VR in everything from amusement parks and arcades to military and first responder training, to manufacturing and design.

The setup minimizes the space, power and cooling required, making the system portable and quick to deploy. This is particularly advantageous for the growing market for location-based VR environments, the customized VR spaces popping up at cinemas, shopping malls and elsewhere.

Initially, the reason for developing this system was to figure out a way to support multi-user VR. However, other interesting use cases began to emerge, including a mixed-reality spectator view, where some virtual machines drive head-mounted displays for participants, while others drive virtual cameras for observers.

“The possibilities are endless,” said Tom Kaye, a senior solutions architect at NVIDIA who helped develop the system. “With the addition of remote management and reliability features, such as multiple templates, clone on boot and remote rebuilds, we could see system builders working to create a robust, ready-to-deploy multi-user VR appliance.” 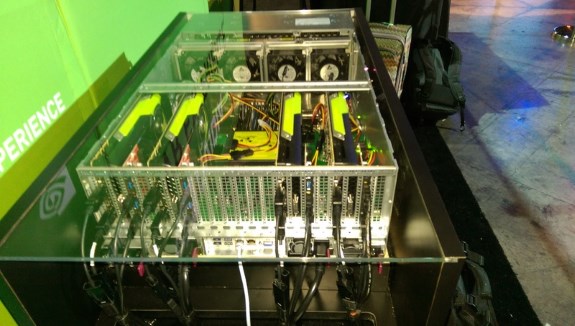