Cooler Master brings old legends back to life at Computex

Posted on Tuesday, May 30 2017 @ 16:37 CEST by Thomas De Maesschalck
Cooler Master provides a run-down of the new products it's showing off at Computex in Taiwan. The firm is breathing new life in old legend, it's revealing a new Cosmos cases as well as a new HAF series. Cooler Master is also jumping onboard the RGB LED hype train. The company explains that initially they sensed that fans didn't want RGB, but now the hype is so big and tastes have changed so the company can no longer afford not to have RGB LEDs in its product lineup.

Cooler Master is proving at Computex just how active it has been during its 25th anniversary. With shining rigs in every corner, the revival of its most popular products, and a whole section devoted to live building, modding, and tutorials, it’s hard not to notice how jaw dropping PCs can look.

“People think that a desktop PC is either a plain black box, or that it’s too hard to build something nice yourself. I see first-time builders all the time put together a stunning rig in about a few hours. In 25 years, we’ve come a long way. Building your own PC is still the best way to get everything you want, and all you need nowadays is the right tools,” said Charlie Wu, Brand Manager.

A Dream to Build, Look At, and Use
The four elements Cooler Master is calling “essential” to today’s performance PC are – (1) design, (2) customizability, (3) software and (4) functionality, especially for gaming. In each of these areas, Cooler Master is announcing or launching a substantial amount of products. Ever wary of release dates, fans will be pleased to know that all of the products highlighted will launch before the end of the year.

Design: The In-House Advantage
Cooler Master built its reputation on manufacturing and design innovations in the PC industry, like the world’s first all-aluminum case (ATC-100), world’s first CPU heat pipe cooler (CH5-SKII), or new spins on traditional air tower looks like the V8 GTS. The products on display have all but synchronized with the latest trends, and then some. In the realm of PC cases, for example, we are seeing glass, acrylic, aluminum, and RGB lighting all incorporated into its new releases, like the MasterCase H500P (formerly the HAF Series), COSMOS C700P, and the new Q Series.

Yes, those cases are what you think they are: the next offspring of the legendary HAF and COSMOS lines. The COSMOS C700P keeps the classic elements of its predecessors – like four thick, brushed aluminum handlebars – and combines that with more technology from Cooler Master’s modular concept case than any other to date. This means lots of room and options for internal layouts and even a rotatable, removable motherboard tray. You’ll be able to see in-depth coverage of these cases on Cooler Master’s social media and its Computex media partners.

On the heated side of things, Cooler Master is tweaking its latest heat pipe technology, called “3D Liquid Vapor Chamber,” as the next in line after the flagship MasterAir Maker 8. Breakthroughs on the design have allowed them to not only extend the length of the piping into a loop, but also add a dual tower with up to three fans for a fat cooler sandwich.

One of Cooler Master’s MasterWatt power supplies has gone fanless. According to their engineers, the Titanium-grade PSU is a “true” fanless in the sense that it runs at normal load percentages up to 40°C instead of using larger wattage supplies and capping the rails at half load.

RGB: Shine from the Inside
Cooler Master held back on the RGB craze when everything started in 2015, probably because most of its fans actually prefer cleaner looks over flashy lights. This Computex we can say it holds back no more, though new products come in a diffused style that speaks of Cooler Master taste. Almost 15 new products are accented in RGB nodes, spanning across coolers, peripherals and MasterCase accessories. Even power supplies have not escaped.

The lighting options have exploded in their cooling lines. Many of the new air coolers in the MasterAir Series come with RGB fans and lights built into the frame itself. Liquid AIO coolers in the MasterLiquid Series are now sporting eight nodes in the pump for a variety of effects. The case fan RGB line has expanded to all three blade designs and 120/140mm sizes. All of the fans come certified compatible with RGB applications from all four motherboard manufacturers.

Furthering functionality is dedicated RGB hardware in the form of a controller hub. If you don’t have an RGB motherboard, you can still utilize one of the four 4-pin ports on this puppy along with Cooler Master’s newly released RGB software that was first successfully used on AMD Ryzen’s Wraith Max stock coolers. One of the goodies of the software is the exclusive “mirage” effect that replicates the illusion of spinning car rims.

Customization: The Showcase Look, Out of the Box
Options for easily customizing products to your preferred look and functionality are extending beyond the MasterCase’s FreeForm Modular System and 25+ accessories. Most notably is Cooler Master’s first foray into a DIY liquid cooling kit since the days of the Aquagate. The MasterLiquid Maker 240 lowers the installation curve by providing everything in the box, including less hassle soft tubing, magenta red stock coolant, copper fittings and a beautifully finished water block.

MasterLiquid Maker 240_Color
Although the modular concept of the MasterCase’s FreeForm Modular System is still expanding to over 25 total accessories, there are new players in town with the MasterBox Q Series. The unique “cube” design of the Micro-ATX cases is playful: the frame can be rolled and reconfigured by swapping side panels, handlebars and the I/O. One of the models actually props the chassis up like a diamond, giving it an angular, crystal look gamers will appreciate.

In a further attempt to curate all parts of the internal layout, Cooler Master is working with modders on its fully modular power supplies in the MasterWatt Series to provide pre-sleeved options in different colors. Each cable will be checked and certified by Cooler Master and sold on their own platform. If sleeving is not your thing, they are adding colors to their flat ribbon cables. Even the case itself is in the paint shop with an experimental red finish identical to the MasterCase Maker 5t, and recessed RGB LEDs trimming its new MWE series of more affordable PSUs.

Gaming: Make Your Gaming Experience
Cooler Master has devoted a great deal of space to its gaming segment at the Computex booth. Within, gamers will be pleased to see the launch of five new peripherals, as well as support from new case designs like the MasterCase H500P (formerly the HAF) and the MasterBox Q Series.

Most striking of the new peripherals – which include two mice, two keys, and a headset – are the improvements to the RGB lighting design. Floating keycaps on both the flagship MK750 keyboard and the MS120 “clicky” membrane keyboard give a visible boost to illumination levels. Settings can be made and saved on the keyboard internals without having to fuss with external software. The two mice have gone the way of right-handed orientations, contoured specifically for the two main gaming grip styles of palm and claw.

CM Computex 2017 Peripherals
The reintroduction of high air-flow cases in the H500P should invoke images of large fans and sturdy cases, something Cooler Master has kept in the design. Different is the trimmer profile, polygonal frame for air flow, tempered glass and 200mm RGB fans. 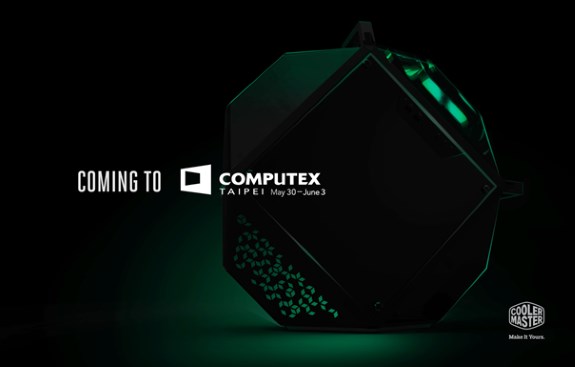