NVIDIA is now worth over $100 billion

Well that didn't take long, after another 3 percent gain NVIDIA's market capitalization is now firmly above the $100 billion mark. NVIDIA's share price has been on a roll recently and has skyrocketed a whopping 61.48 percent over the last month.

Before the opening bell of the market, Bank of America Merrill Lynch upgraded NVIDIA's price target from $155 to $185. Analyst Vivek Arya remarks NVIDIA CFO Colette Kress' tone at the bank's Global Tech Conference earlier this week was very positive on both growth and execution.

Arya sees momentum growing due to Nvidia only having 17% ownership by active large-cap US managers, potential SoftBank Vision Fund ownership expansion, and the upcoming E3 gaming show that marks a period of seasonal strength.

The company's share price has more than tripled since a year ago as investors hyped up the stock price thanks to NVIDIA's continued dominance in gaming and the rapidly growing data center sales. Lots of hope is pinned on the growth potential in non-gaming market thanks to the rise of machine learning/artificial intelligence and self-driving cars. 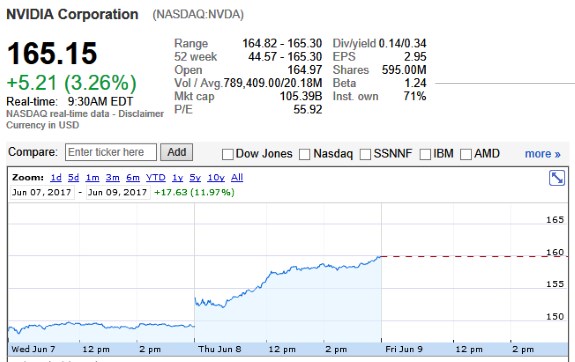